Herbst Rallies for Fifth at Texas 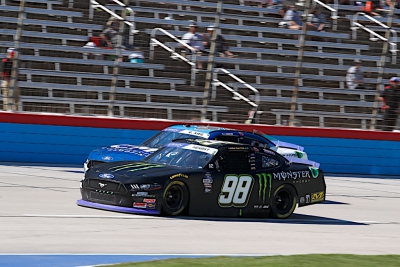 Riley Herbst and the No. 98 Monster Energy team proved to be resilient in the Texas heat in Saturday’s Andy’s Frozen Custard 300 at Texas Motor Speedway in Fort Worth, the opening playoff race of the 2022 NASCAR Xfinity Series season. The Las Vegas native started the 200-lap race 11th and struggled with a loose racecar in the initial laps. The No. 98 Monster Energy Ford Mustang then had to drop to the rear after a penalty during the day’s first pit stop, but Herbst made quick work in his drive back toward the front. By the end of Stage 2, he was sitting 12th, then restarted ninth for the final stage. Chaos ensued on multiple occasions during the last 100 laps, and Herbst used his savvy driving skills to maneuver his way around two accidents, sitting fourth on a lap-126 restart. He stayed in the top-five until his final scheduled green-flag pit stop on lap 169 and rejoined the field in 15th. The race went caution-free until the checkered flag and Herbst was able to work his way into the top-10 by lap 182. He worked his way forward from there to score his seventh top-five of the season and his second in a row.

“Focus was a tough factor all weekend. I’m thinking of the VanderLey family and DJ. Get well buddy, we missed you tremendously. I think today comes down to what we’ve been preaching all year – consistency. We’ve got to clean everything up on pit road and with qualifying. Coming out of Texas with a top-five is good and we’ll go to battle again at Talladega.”

● Herbst earned his seventh top-five of the season and his first top-five in six career NASCAR Xfinity Series starts at Texas.

● Herbst’s fifth-place finish bettered his previous best at Texas – eighth, earned in May.

● This was Herbst’s second straight top-10 at Texas. He finished eighth at the track in May.

● Noah Gragson won the Andy’s Frozen Custard 300 to score his 12th career Xfinity Series victory, his seventh of the season, and his first at Texas. His margin over second-place Austin Hill was 1.238 seconds.

● There were nine caution periods for a total of 52 laps.

● Only eight of the 38 drivers in the race finished on the lead lap.

The next event on the NASCAR Xfinity Series schedule is the Sparks 300 on Oct. 1 at Talladega (Ala.) Superspeedway. The race starts at 4 p.m. EDT with live coverage provided by USA and SiriusXM NASCAR Radio.