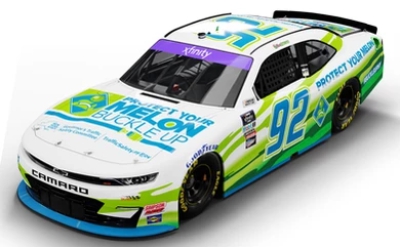 For the third time this year, Chastain is set to drive DGM Racing’s No. 92 NASCAR Xfinity Series (NXS) car. The New York Governor's Traffic Safety Committee (GTSC) will serve as the primary sponsor of the No. 92 Chevrolet Camaro at Watkins Glen International (WGI).

Chastain’s car will carry a specialty paint scheme that resembles a watermelon as part of the GTSC’s #ProtectYourMelon campaign to promote safe driving habits and seat belt usage. As a leader in highway safety, New York became the first state in the nation to enact an adult seat belt law nearly forty years ago. In 2020, new legislation went into effect in New York, requiring all adult passengers to buckle up regardless of their seating location within the vehicle.

“Seat belts save lives, and by expanding the seat belt law to include rear-seat passengers, New York State is able to save even more lives,” said Mark J.F. Schroeder, Commissioner of the Department of Motor Vehicles and GTSC Chair. “Our hope is that wearing a seatbelt becomes second nature for all New Yorkers, so that we have fewer deaths and tragedies on our roads. Partnering with NASCAR driver Ross Chastain continues to be an effective way to get that message to young people who are less likely to buckle up. GTSC is grateful for his partnership and we wish him luck in his upcoming races.”

Less than a month ago, Chastain drove DGM Racing’s No. 92 to a fourth place finish at the Indianapolis Road Course, tying the team’s best finish as an organization (Alex Labbé - ROVAL 2020). Chastain also raced with DGM Racing earlier this year at Circuit of the Americas where he qualified 2nd (DGM Racing’s best qualifying position to date) and led 14 of the 46 laps in the Pit Boss 250. The following day he claimed his first NASCAR Cup Series (NCS) win.

Chastain is currently sitting second in the NCS playoff points standings after claiming his first two NCS wins, 10 Top-5s and 14 Top-10s. In addition to his impressive Cup season, Chastain is a NXS veteran with 193 NXS starts, including two wins, 22 Top-5s and 48 Top-10s.

“DGM Racing has brought me fast Chevrolet Camaros to race this year, and I can’t wait to get back behind the wheel of the No. 92 at WGI,” said Chastain. “I’m thrilled to be part of the Protect Your Melon initiative again to spread awareness about the importance of wearing seat belts and to encourage race fans to buckle up!”

The NXS race at WGI will be televised live on the USA Network on Saturday, August 20 at 3:00 p.m. ET. Practice and Qualifying for the NXS race will take place earlier that morning at 10:05 a.m. ET. Chastain and the Protect Your Melon No. 92 Team Chevy will be at the Schuyler County Courthouse Lawn in Watkins Glen on Thursday, August 18, from 9:00 a.m. to 12:00 p.m. and 1:00 p.m. to 3:00 p.m. Visit them at the New York State Department of Motor Vehicles booth.