Herbst Nabs Another Top-10 at Michigan 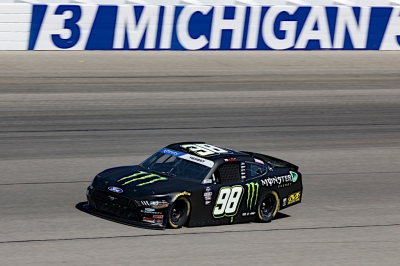 Riley Herbst drove his No. 98 Monster Energy Ford Mustang to another top-10 finish Saturday at Michigan International Speedway in Brooklyn. By finishing ninth in the 125-lap race around the 2-mile oval, Herbst scored his 14th top-10 in the 21 NASCAR Xfinity Series races held this season. It was also his second straight top-10, as the 23-year-old racer from Las Vegas finished sixth last Saturday on the road course at Indianapolis Motor Speedway. In fact, this was Herbst’s second consecutive top-10 at Michigan. He finished seventh in last year’s race. Despite those solid statistics, Herbst was disappointed with his run. His No. 98 machine was too loose coming off the track’s sweeping corners but too tight in the center. By the time Herbst and the team got a better handle on their racecar, the race was over.

“We just struggled with balance all day. It sucks we ran this bad but, all in all, another top-10. We’ll move onto The Glen.”

● Ty Gibbs won the Michigan 250 to score his ninth career Xfinity Series victory, his fifth of the season and his first at Michigan. His margin over second-place Justin Allgaier was 1.160 seconds.

● There were four caution periods for a total of 19 laps.

● AJ Allmendinger remains the championship leader after Michigan with a 19-point advantage over second-place Allgaier.

The NASCAR Xfinity Series enjoys a rare off-weekend before returning to action on Aug. 20 at Watkins Glen (N.Y.) International. The race starts at 3 p.m. EDT with live coverage provided by USA and SiriusXM NASCAR Radio.