Allmendinger Gets a Win at Indy 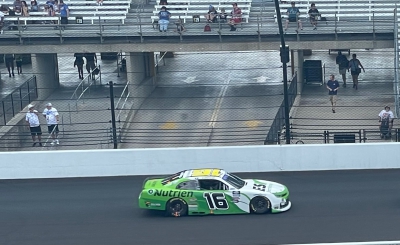 AJ Allmendinger won his 2nd race at Indianapolis Motor Speedway Saturday. He started from P1 and ended up P1. Alex Bowman and Jason Allgaier rounded out the podium for the Pennzoil 150.

It looked to be a rocky start because by lap 4, 2 cars had already pitted and taken on tires. It looked like tire wear was going to be an issue, but that smoothed out as the race went on. When asked what he needed help with, Noah Gragson said, “the driver.”

The first yellow came out with 5 laps to go in Stage 1 when Parker Kligerman’s brakes let go and he wrecked Ryan Ellis. On Kligerman’s exit after being checked out, he said, “I find myself a pretty adept driver, but I couldn’t stop it without brakes. I just couldn’t Flintstone it.” He expressed his apology to Ellis and his crew and to his own crew.

Gragson took stage 1 and Josh Berry took stage 2. Allmendinger led 42 laps of the Pennzoil 150 and was overjoyed to do so.  He summed it up by saying, “Anytime you win at Indy it’s a big deal, at least for me. This place is special. I love this race track.” Winning this race moved Allmendinger into the points lead over Justin Allgaier and Ty Gibbs. The top 5 are all within 100 points of each other. The top 5 is rounded out by Josh Berry and Noah Gragson. It looks to be a fast paced finish to the shootout.