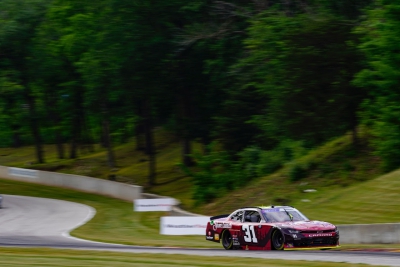 - Practice; After the completion of a 20-minute practice session on Friday afternoon, Myatt Snider would record a fast lap of 138.571 at 105.165 mph on Lap-1 of his 7-lap session making the No. 31 Shore Lunch Chevrolet Camaro SS 24th fastest of the 41 cars entered for Saturday’s NASCAR Xfinity Series (NXS) Henry 180.

– Starting Position; Directly after practice teams would move into NXS qualifying to determine the starting order for Saturday afternoon’s Henry 180. In 2022, road course qualifying would consist of two rounds of group qualifying with the first round consisting of 15-minutes of two groups with the fastest five cars in each group moving onto the second round for a 10-minute session to determine the pole sitter. Snider would lay down a fast lap of 138.517 at 105.206 mph in Group A putting the No. 31 Shore Lunch Chevrolet Camaro 16th in the group at the end of the 15 minutes failing to transfer on to the fast-10. At the conclusion of qualifying Snider would fall into the 32nd starting position for Saturday’s Henry 180.

– Road America Stats; Saturday’s NXS Henry 180 will mark Snider’s third career NXS start at Road America. In 2020 during his NXS debut at Road America, Snider would be involved in a crash late in the race resulting in retiring four laps short of the finish and being credited with the 32nd position. The 2021 edition after moving to a new team would see Snider run strong all day, but would be involved with in an altercation with the No. 44 late in the race that would see him loose the lead pack and ultimately finish in the 23rd position. Last season at Road America JAR had Kaz Grala behind the wheel of the No. 31 after starting in the 7th position, Grala would run in the Top-15 the entire race before fading back in the final stage to finish in the 18th position.

Shore Lunch; For generations, fishing guides handed down their homemade recipe for fish batter. Beloved by fishermen and everyone alike, it became known as the Old Guide’s Secret™. Using this secret, today, Shore Lunch offers the perfect soup, breading and batter mixes to complement any meal or enrich the flavor of your favorite recipes. Rich and savory, all of our mixes are intended to make it easy for you to serve up delicious, homemade meals in a fraction of the time.

For more information on Shore Lunch and where to purchase visit ShoreLunch.com

– Chassis; Jordan Anderson Racing Bommarito Autosport will bring Chassis No. 104 to Road America for Snider to compete with in the Henry 180. Chassis No. 104 last saw on track action for JAR two races ago at Portland International Raceway for the Pacific Automation 147, a race where Snider would have a career day leading 19 laps, capturing the JAR’s first Stage Win, running in the Top-5 for ¾ of the race enroute to a second-place finish. Prior to Portland, Chassis No. 104 last saw on track action for JAR back in March at Circuit of the Americas (COTA) in Austin, Texas for the Pit Boss 250 a race where Snider avoided trouble all day and was able to come home with a strong 6th place finish. In three races in the 2022, Chassis No. 104 holds an average finish of 4.0.