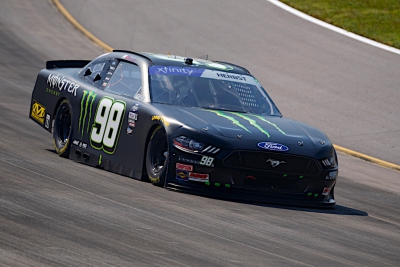 Riley Herbst and the No. 98 Monster Energy team were strong out of the gate as the NASCAR Xfinity Series returned from a two-week break during Saturday’s Tennessee Lottery 250 at Nashville (Tenn.) Superspeedway. After scoring his second career Xfinity Series Pole this morning with a lap of 156.665 mph, Herbst led the field to green for this afternoon’s 188-lap race. The Las Vegas native ran solidly in the top-10 for the first two stages, finishing third and fourth, respectively, and earning a total of 15 bonus points. Crew chief Richard Boswell made the call of the race when he brought Herbst to pit road for the final time during a lap-117 caution while half the field stayed out. Herbst restarted 17th and quickly and methodically worked his way into the top-10 by lap 140. The final 58 laps of the race went green, playing into the No. 98 Monster Energy team’s strategy as others were forced to pit for tires and fuel. Herbst was able to stay out and drive his way up to the third position, which he held all the way to the checkered flag. It was his fifth top-five and 10th top-10 of the season.

“Our Monster Energy Ford Mustang was good today. We got the pole and we wanted to lead some laps but, unfortunately, we didn’t lead any. We got quite a bit of stage points, which is what we needed. It’s just a good day for everybody at Stewart-Haas Racing, myself included. I’m proud of all these guys on the 98 team. If we just keep getting these runs, we’ll eventually get there and, if we just keep knocking on the door, eventually it will open.”

● Herbst’s pole was the second of his NASCAR Xfinity Series career. He won his first in May 2021 at Charlotte (N.C.) Motor Speedway.

● Herbst third-place finish equaled his best result so far this season. He finished third May 7 at Darlington (S.C.) Raceway.

● Justin Allgaier won the Tennessee Lottery 250 to score his 18th career Xfinity Series victory, his second of the season and his first at Nashville. His margin over second-place Trevor Bayne was 4.513 seconds.

● AJ Allmendinger remains the championship leader after Nashville with a 25-point advantage over second-place Ty Gibbs.

The next event on the NASCAR Xfinity Series schedule is the Henry 180 on July 2 at Road America in Elkhart Lake, Wisconsin. The race starts at 2:30 p.m. EDT with live coverage provided by USA and SiriusXM NASCAR Radio.