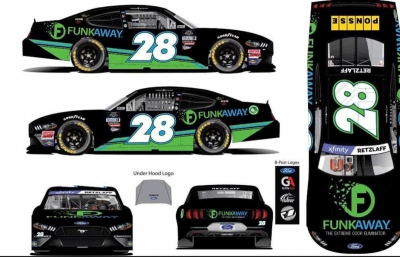 Set to return to the NASCAR Xfinity Series scene for the first time in nearly two months, thriving rookie Parker Retzlaff returns to RSS Racing hoping to earn the spotlight in his return with his second top-10 finish of the season in Saturday afternoon’s Tennessee Lottery 250 at Nashville (Tenn.) Superspeedway.

In his most recent race at Dover (Del.) Motor Speedway in early May, Retzlaff adapted to the Miles’ the Monster in Xfinity Series competition and overcame a subpar qualifying effort to deliver a respectable 17th place finish – recording his third top-20 finish of the year in four races overall.

With Nashville the official start of the summer stretch, Retzlaff turns to the 1.33-mile concrete race track looking for a hot finish on what is expected to be a brutally hot weekend.

“I’m ready to get back to work,” said Retzlaff. “It seems like forever ago that I’ve competed in the NASCAR Xfinity Series with RSS Racing, but I’m eager to get back behind the wheel and have a strong finish that builds some momentum for my upcoming races.”

Retzlaff has never been to Nashville Superspeedway, but this isn’t the first venue this season that the 19-year-old hasn’t experienced actual track time this season, including Phoenix Raceway, Richmond Raceway and Martinsville Speedway respectively.

But it’s his impressive top-10 finish at Richmond Raceway that is pivoting Retzlaff forward with nearly an hour of practice on deck Friday afternoon to prepare him for his fifth Xfinity Series start of his career.

“I’m approaching Nashville much like I have all season,” added Retzlaff. “I’m utilizing the resource that is available to me, such as iRacing, photos and videos to study and get acquainted for Nashville, but with it expected to be very warm this weekend, track time will mean everything.

“I know that the RSS Racing team will bring me a fast Ford Mustang, so I’m making sure I’m taking the necessary steps myself to stay ahead of the heat from the driver’s perspective by getting hydrated and following a regiment that will allow me to beat the heat on Saturday afternoon.”

Nashville isn’t only huge because it’s Retzlaff’s return – but because he will debut a new marketing partner in FunkAway, a line of odor elimination products that removes the horrible effects of bad smells aboard his No. 28 Ford Mustang.

B2Z Products Inc. is headquartered in Waukegan, Illinois, and is the developer of FunkAway, a line of odor elimination products that removes the horrible effects of bad smells.

Guaranteed to work on clothing, shoes, gear, pet products, car interiors and more, FunkAway allows users to renew and refresh, rather than throw away.

“It’s incredibly important to me to have a good showing at Nashville this weekend and give FunkAway a memorable race,” sounded Retzlaff. “I use FunkAway at home and it’s awesome and I’m sure every driver in the Xfinity Series will need some FunkAway in one shape or form with the weather we’re set to experience this weekend.

“My goal for Saturday afternoon is to give FunkAway a strong debut that will allow us to build our partnership for future races. I’m just ecstatic about having the opportunity to represent FunkAway and hopefully introduce their product to some new race fans!”

“I feel very fortunate to be able to have the support of FunkAway, Ponsse, Eco-Tracks, Northern Chill Spring Water and our other partners not only for Nashville this weekend but for the 2022 season overall,” explained Retzlaff.

“Without them, I would not be competing in the Xfinity Series this weekend let alone this year. My goal is to go out there and just stick to the same goals we’ve had all season. We want to be better than we unloaded and go forward during the race.

“Hopefully, on Saturday afternoon, we can do a little better than the last race and circle back inside the top-10.”

Retzlaff graduated to the Xfinity Series in 2022 after spending the last two years competing in the ARCA Menards Series East tour where in 12 starts, the Rhinelander, Wisc. native delivered one top-five and nine top-10 finishes, including a career-best fourth-place finish in June at Southern National Motorsports Park (SNMP).

In addition to Nashville, Retzlaff will drive an RSS Racing entry in several upcoming races, including Kansas Speedway, Bristol (Tenn.) Motor Speedway and the season finale at Phoenix (Ariz.) Raceway on Sat., Nov. 5, 2022.

Retzlaff added, “I feel like I’ve raced the others on the track with respect and race them how I liked to be raced. Nashville has some tight confines, but I would like to continue building on that respect with my peers and teammates and hope it will be mutual with them. I’m just looking forward to getting to the track and getting to work.”

He is also the rookie driver of the No. 6 KOHLER Generators Ford Mustang for Roush Fenway Keselowski (RFK) Racing in the eNASCAR Coca-Cola iRacing Series.