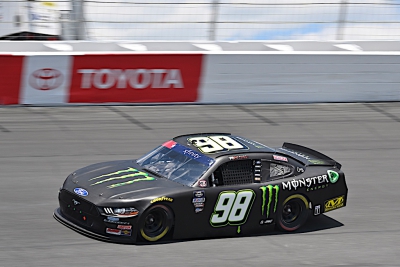 Riley Herbst endured a difficult outing in the Alsco Uniforms 300 NASCAR Xfinity Series race at Charlotte (N.C.) Motor Speedway. It started on Friday when contact with the wall during qualifying meant Herbst was forced to go to a backup No. 98 Monster Energy Ford Mustang for Saturday’s race. Despite the adversity, Herbst methodically moved his way forward, coming from the back of the 38-car field to crack the top-15 by lap 32. In the final stage of the 200-lap race, Herbst was running ninth, but the misfortune that struck Herbst in qualifying reared its head again in the race. A cut tire sent Herbst into the turn three wall on lap 104, damaging the right side of the Monster Energy Ford. Forced to pit for repairs, Herbst went four laps down. Nonetheless, he was able to return to the track and finish the race, coming home 25th and avoiding a dreaded DNF (Did Not Finish).

“Man, that’s a tough one. This was probably the best car I’ve had at Charlotte, but I just couldn’t get my laps back after the tire went down. It’s not ideal, but I’m proud of the No. 98 Monster Energy team for not giving up. We were putting down some of our fastest lap times after the incident. Cautions just didn’t work out in our favor. On to Portland.”

● The 25th-place finish ended a string of top-10 finishes for Herbst. Coming into Charlotte, Herbst had scored six straight top-10s, a run that began with a fifth-place drive April 2 at Richmond (Va.) Raceway.

● Josh Berry won the Alsco Uniforms 300 to score his fourth career Xfinity Series victory, his second of the season and his first at Charlotte. His margin over second-place Ty Gibbs was 18.039 seconds.

● There were eight caution periods for a total of 44 laps.

● Only six of the 38 drivers in the race finished on the lead lap.

● AJ Allmendinger remains the championship leader after Charlotte with a 33-point advantage over runner-up Gragson.

The next event on the NASCAR Xfinity Series schedule is the Pacific Office Automation 147 on Saturday, June 4 at Portland (Ore.) International Raceway. The race starts at 4:30 p.m. EDT with live coverage provided by FS1 and SiriusXM NASCAR Radio.