Gibbs Drives Through the Field to Finish Second in Charlotte 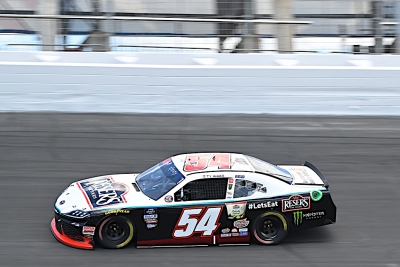 After starting 36th due to an incident in practice, Ty Gibbs (second) drove through the field to lead Toyota with a runner-up finish in the NASCAR Xfinity Series race at Charlotte Motor Speedway on Saturday afternoon.

How close were you to having a perfect day after having to start in the back of the field?

“We were just a little slower than those guys and I was too tight center. Our guys worked really hard overnight to get this thing ready so I’m very thankful to my guys. Just need to be able to rotate the center of the corner, that’s where we were lacking the most and that’s where we got beat. But we held onto a second-place finish. We’ll take that – solid day.”

Is this a satisfying day with this finish?

“No, never satisfied unless you win and you can make mistakes and win too, but you have to fix those. If not, then you shouldn’t be here.”

How was passing on the race track and how did the resin come in on the top groove?

“I still think the resin, I just don’t really like it at race tracks like this to put on a good show. I really don’t think we need any, but we have to make it happen and we did. The resin was nice, better than the PJ1. It was cool to run the top, but three and four is just so rough with all the sealer that they put down. Just making sure your car is setup to get through there. If you lose the nose through the bumps then you’ll hit the wall and you don’t want to do that. Need to make sure your car is free enough to get through there.”