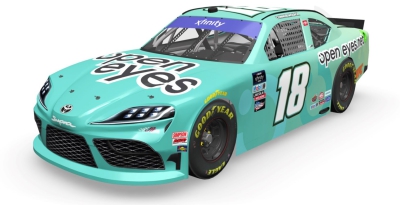 With 21 starts in the Trans Am Series presented by Pirelli, Connor Mosack is ready to grab another rung on the racing ladder by stepping up to the NASCAR Xfinity Series.

The 23-year-old racer who is currently in his second year competing for TeamSLR in the TA2 division of “America’s Road-Racing Series” will make his Xfinity Series debut June 4 in the inaugural Pacific Office Automation 147 at Portland (Ore.) International Raceway. Mosack will drive the No. 18 OpenEyes.net Toyota GR Supra for Joe Gibbs Racing in the 75-lap race around the 1.964-mile, 12-turn road course.

“Our Xfinity Series program was designed to provide opportunities to racecar drivers like Connor who are looking to expand their careers by challenging themselves in a very competitive racing series,” said Steve deSouza, Executive Vice President, NASCAR Xfinity Series/Development, Joe Gibbs Racing. “Connor has accomplished quite a bit in a relatively short period of time in Trans Am and we’re proud to help further his development in NASCAR.”

Portland is an appropriate venue for Mosack to make his first Xfinity Series start. While the Charlotte, North Carolina-native doesn’t have any prior experience at the flat, clockwise circuit in the Pacific Northwest, Mosack has plenty of experience learning new racetracks quickly. As a TA2 rookie in 2021, all but two of the series’ 10 tracks were new to him. Nonetheless, Mosack was a fast study. He scored four podium finishes in his final eight races, including a breakthrough win Sept. 12 at Watkins Glen (N.Y.) International.

“Every race is a new opportunity to learn and apply the lessons from your last race,” said Mosack, who finished third in the 2021 TA2 championship standings and is already a two-time pole winner in 2022. “I feel like I’ve learned a lot in Trans Am thanks to the coaching I’ve gotten from Scott Lagasse Sr. and Jr., at TeamSLR, and I genuinely want to see how it all translates to the Xfinity Series. I’m looking forward to the experience of working with Joe Gibbs Racing and their veteran crew chief Jason Ratcliff in my debut at Portland, and we’re all grateful to represent OpenEyes.net."

Open Eyes is a global impact ministry co-founded by Frank Harrison, Chairman and CEO of Coca-Cola Consolidated, and his son James Harrison, who passed away while serving in Kenya in 2010. James’ mission to serve others selflessly continues today through the Open Eyes Mobile Messengers program and its relief and development efforts around the world, including Ukraine and the Middle East.

“We are honored and thrilled that Connor and Joe Gibbs Racing chose to showcase Open Eyes by putting us on board as Connor makes his debut in the NASCAR Xfinity Series,” said Denny Matthews, President, Open Eyes. “Our purpose of accelerating the Gospel to the unreached and underserved is fast tracked as a result of our partnership with Connor. Our global team joins me in wishing Connor great success as he pursues his passion in the Xfinity Series.”

Mosack has firsthand knowledge of Open Eyes’ mission, as he volunteered with the group in Africa during the summer of 2017, visiting Rwanda and Uganda.

“The time I spent with Open Eyes in Africa was probably one of the most impactful moments of my life,” said Mosack, a 2021 graduate of High Point (N.C.) University with a degree in business entrepreneurship. “Its name speaks for itself because it did open my eyes to how people live in other areas of the world and how having purpose, along with someone they can lean on for strength and support, can make a difference in their everyday lives.”

Mosack’s experience with Open Eyes and his time at High Point has contributed to a well-rounded upbringing. Mosack played football and lacrosse in middle school and high school, and it wasn’t until he was 18 that his racing career began. He started in Legends cars and after winning five championships, he transitioned to Late Model stock cars in 2019. He ran the full Solid Rock Carriers CARS Tour in 2020, winning the rookie-of-the-year title. Mosack augmented his Late Model schedule with four TA2 races in late 2020 before committing to TA2 fulltime in 2021 while also competing in select ARCA Menards Series races. In his most recent ARCA start May 14 at Kansas Speedway in Kansas City, Mosack finished fifth.

“For me, seat time is really the most important thing, and experience in just about any car is really helpful,” Mosack said. “Knowing you can be fast in the Trans Am Series gives you the confidence that you can drive fast and be competitive in other series. That’s my biggest takeaway as I get ready for my Xfinity Series debut at Portland.”

The Pacific Office Automation 147 gets underway at 4:30 p.m. EDT on Saturday, June 4 with live coverage on FS1 and SiriusXM NASCAR Radio.