Reddick battles JRM for first win in Xfinity since 2019 Featured 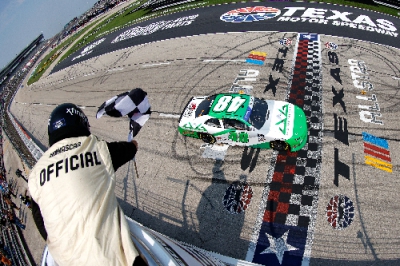 Tyler Reddick (No. 48) taking the checkered flag at the Texas Motor Speedway this Saturday during the SRS Distribution 250. Getty Images

Tyler Reddick, who has been so close, so many times in 2022 to winning in the Cup Series, fought off the JR Motorsports dominance to win his first Xfinity Series for Big Machine Racing. This was also Reddick's first win in NASCAR”s second tier series since 2019 at Homestead Miami Speedway where he won the championship in the same race.

The race started off with Noah Gragson for JR Motorsports starting on pole when they came around to take the green flag for the SRS Distribution 250 at Texas Motor Speedway. He was then passed by his teammate Justin Allgaier on lap 21, but the caution would come out a lap later due to fluid on the racetrack. The race restarted on lap 31, when Gragson regained control of the race until the yellow was out again on lap 33 due to a spin by C.J. McLaughlin. Gragson continued to look strong in the lead until he was passed by Josh Berry, another JRM driver, who led to win stage one. The stage ended early due to another spin by McLaughlin in turn two.

Berry continued to lead even when the caution came out for the fourth time in the race due to a spin by Austin Hill on lap 58. The races restarted on lap 62, and stayed green until Berry won the second stage of the race on lap 82. Allgaier then retook the lead on the restart on lap 88, but then a multi car crash on the backstretch happened on lap 89. The wreck involved Matt Mills. Berry, Gragson, Brandon Jones, Ty Gibbs, and Josh Williams. The green flag was back out on lap 94, but five laps later Gragson took another spin in turn one bringing out the seventh caution, and he wouldn’t be a factor the rest of the day.

The race went back to green conditions on lap 103, with JRM driver Justin Allgaier still in control of the race. That was until lap 112, when he was passed by Cup Series regular William Byron, who was also making his first return in the Xfinity Series since 2017 where he won the championship. Then the caution was back out once again after Allgiaer was slow on the track, ending his hopes to win in Fort Worth, Texas.

Austin Hill, who spun earlier in the race, led on lap 119, until the ninth caution was back out on lap 124. Joe Gaf Jr, David Starr, Alex Labbe, and Sieg had an accident in turn three on lap 124. On lap 124, the green flag for the final 40 laps of the SRS Distribution 250 at Texas Motor Speedway resumed until Sieg once again crashed in turn one and was done for the day.

Brandon Jones led two laps from 135 to 136 until Reddick took the lead away on lap 137. Two laps later, the final caution of the day was for a seven car pile up on the front stretch from lap 139-145. Reddick would lead from then til the finish and would win at Texas.

The race had in total 11 cautions for 62 laps, making the 167 lap race being 37.1% ran under the yellow flag for a total of two hours, 28 minutes, and five seconds. The average speed was 101.497 mph throughout the 250 mile event. Next week, the Xfinity Series takes on the Alsco 300 at Charlotte Motor Speedway. That race will start at 1 p.m. Eastern on FS1, PRN, and SiriusXM NASCAR Radio.