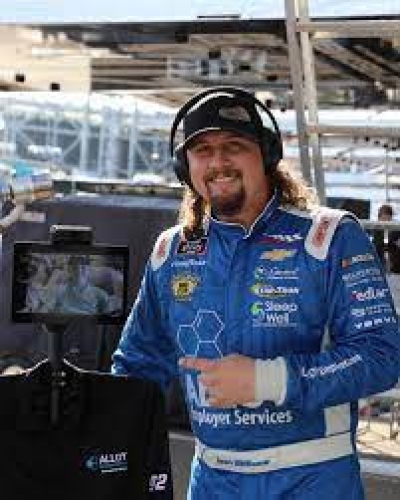 Earlier today, Nascar Xfinity Series driver Josh Williams announced a strategic partnership with award-winning robotics company, OhmniLabs, that will bring innovation to new speeds. OhmniLabs has provided two of its telepresence robots to accompany Williams on this year’s Josh Williams Hospital Tour, which kicked off earlier this season in Daytona.

With the Ohmni robot on-site at the track with Williams, patients drive the robot virtually from their hospital room, exploring the track and cruising through the garage alongside Williams. Ohmni Robots are easy for kids to control themselves using a tablet, computer or phone, and their smiling faces are proudly displayed on a tablet attached to the robot’s “head.”

The Josh Williams Hospital tour has been in existence since 2015 and Josh has visited over 140 hospitals in person. In 2020, the pandemic restricted in-person visits at some hospitals, so virtual options were explored and Williams used Zoom to visit and play games with the kids, as well as collect the kids’ handprints for the signature end of the season “handprint car.”

Earlier this year, Phoenix Children’s Hospital (PCH) introduced Williams to Ohmni Robots, and this took the tour to a whole other level of innovation. Ohmni Robots have been used by PCH for several years to give patients virtual access to spectacular experiences outside the hospital.

“The robots were a perfect solution to our hospital visits, but also inspired us to transport kids onto the racetrack in this really cool new way,” said Williams, who tested out the robots at the Phoenix Raceway last month. “It was the most incredible experience and we knew we had to keep doing these kinds of visits on our tour. People were just blown away - it became a weekly question for me and my team…Where were the robots? Well, now they will travel with us week in and week out.”

OhmniLabs, creators of the robots, have now officially joined Williams in a unique strategic partnership that will leverage multiple NASCAR assets. Two Ohmni Robots will be carried in the team hauler to allow for virtual visits at every track on the schedule. The OhmniLabs logo will appear on the C-Post of the Williams 78 BJ McLeod Motorsports Xfinity entry for the remainder of the 2022 season, and the company will be an active partner in the end of the year handprint car.

“Ohmni telepresence robots are all about establishing connections,” said Tra Vu, Chief Operating Officer at OhmniLabs. “What Josh is doing, allowing kids who are sick or injured to cruise around trackside with him and explore the pit from that perspective, is something the kids will never forget. It builds connections for the other racers as well and hopefully will inspire more athletes, drivers and performers to offer similar experiences.”

Williams is not only thankful for the partnership but excited to welcome OhmniLabs into multiple facets of his season. “We have a lot of ideas for how to incorporate the robots into our day-to-day operations so that more people, families, and anyone anywhere can experience these virtual visits,” he added. “We are exploring charitable and educational elements as well.”

OhmniLabs will utilize the partnership with Williams to promote its new UV-C disinfecting robot, OhmniClean, and educate potential customers such as hospitals, schools, training facilities and other high traffic environments about the need for UV-C disinfection. For many organizations, COVID-19 is still very much top of mind and keeping the patients and staff safe from the spread of bacteria and viruses is paramount.

Williams was able to drive the robot through Phoenix Children’s Hospital earlier in the year and has not ruled out the possibility of some shop or trackside robot racing.