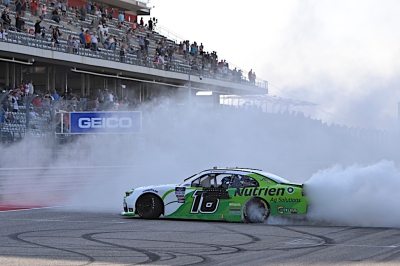 Allmendinger won his first Xfinity Series race of the season, leading 27 of the 46 laps which was a race-high.
Saturday’s win marks Allmendinger’s seventh career Xfinity road course win.
“I was hard on myself yesterday. I was not happy with where I put ourselves, the setup that I made for us,” Allmendinger told Fox Sports post-race. “All these men and women here at Kaulig Racing, between the Cup side of it and the Xfinity side of it, they don’t sleep during the week. They’re busting their tails.

“That’s why I’m so frickin hard on myself sometimes because they deserve to win more than anybody here and I just want to do it for them, so thankfully, we got one done today.”

Rounding out the top five were Austin Hill in second, Cole Custer in third, Noah Gragson in fourth and Sam Mayer in fifth.

Allmendinger, Hill, Gragson and Mayer are the eligible drivers for next Saturday’s Dash 4 Cash opener at Richmond Raceway with their top five finishes.

The NASCAR Xfinity Series will head into Richmond Raceway next Saturday, April 2nd at 1:30 p.m. Eastern on FS1.