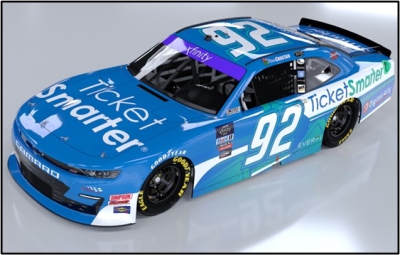 DGM Racing excitedly welcomes Ross Chastain, NASCAR Cup Series driver for Trackhouse Racing, to drive the No. 92 sponsored by TicketSmarter, a subsidiary of Digital Ally (NASDAQ: DGLY) at the Circuit of the Americas. EverFi and Digital Ally will also ride along the No. 92 at the Pit Boss 250 on Saturday, March 26th at 4:30pm ET.

Chastain is an experienced driver with 192 NXS starts, including 21 Top-5s and 47 Top-10s. He finished 7th in driver points in the 2020 NXS season before moving to the Cup series the following year. His last NXS start came at COTA in 2021 where he qualified 2nd for the inaugural Pit Boss 250. In addition to his accomplishments and speed in the NXS race, he achieved a 4th place finish in the Cup series the following day in the inaugural Echopark Automotive Texas Grand Prix.

Mario Gosselin, DGM Racing team owner, says “Ross is a very talented racer, and we’re thrilled for the opportunity to work with him. Ross’s recent accomplishments in the Cup Series are truly impressive. We’re humbled and extremely thankful to have him in the No. 92 this weekend.”

In the Cup series, Chastain is currently sitting 10th in driver points and is coming off three straight top-3 finishes, including 2nd place finishes at Phoenix Raceway and Atlanta Motor Speedway. DGM Racing is also coming off a great weekend at Atlanta Motor Speedway with two Top-10 finishes. The pair looks to continue their success together this upcoming weekend.

“I love to race, I love to compete. When Mario (Gosselin) called and offered me an opportunity to drive his No. 92 Chevrolet, it was without hesitation, “absolutely yes,” said Ross Chastain. “We’ve had three solid races in a row on the Cup side with Trackhouse Racing. COTA is a challenging track, and the more seat time I can get before hopping in the No. 1 Trackhouse Chevrolet on Sunday, the better. I can’t thank Justin (Marks) and Ty (Norris) enough for allowing me to be true to myself and race whenever the opportunity presents itself. I’ve always had a lot of respect for what the DGM Racing group does week-in and week-out and it’ll be fun going to battle with them Saturday at COTA.”

Chastain, a Florida-native himself, is from Alva, FL which is just over an hour and a half from DGM Racing headquarters. He grew up racing at the same tracks Gosselin did before his NASCAR debut. With a father who loves and got him into racing, Chastain is used to the small, family-run team environment. DGM Racing and Chastain have a lot in common and are hoping to add a great run at COTA to that list.

DGM Racing is fielding three entries at the Pit Boss 250. Notorious for their talent on road courses, Alex Labbe and Preston Pardus will be the other two drivers behind the wheel for DGM Racing. In the inaugural race at COTA, Labbe qualified 4th and Pardus achieved a 14th place finish. The Pit Boss 250 will take place on Saturday, March 26th at 4:30pm ET. It will be televised on Fox Sports 1.