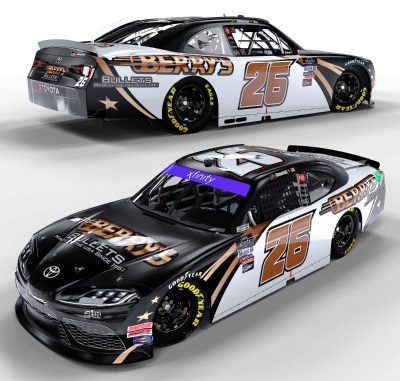 How do you feel about your title chances as you progress through the year?

“I think looking back at last year we were pretty much the favorite all year to win the title. I think coming into this year we definitely had some great momentum on our side from 2021. I feel like we added a lot of value to our notebook last year. I became familiar with my crew chief and my engineer talking on the radio and communicating. What’s going to be different is the practice and qualifying – we’ve got to figure that out again. We didn’t qualify so great in Phoenix and one thing led to another. I definitely think we have a little work to do there, but I feel good. We just have to go out here and continue to do our job. We were able to win both stages at Daytona. We got caught up in the last lap accident there coming to the white, but that’s Daytona. I’m looking forward to Vegas. I got my first win here last year at Las Vegas Motor Speedway with KBM (Kyle Busch Motorsports). Hopefully we can go out and repeat and beat the boss again.”

Where do you see things going beyond the season?

I saw your dad (Joe Nemechek) won at Sebring, was that one of your old late models?

“I believe it was one of my old K&N cars that we used to go and test. It was a road race car. I think he ended up putting it back together. He’s having a blast going and running some of those races with some guys and taking care of other people’s cars as well.”

Is getting back in a super late model something that you would look to do in the next year?

“I would definitely get back behind the wheel of a Super Late Model. I’m going to be doing some other racing this year outside the Truck and Xfinity stuff that will be announced at a later date. Looking forward to having some fun this year. The more time that I can spend behind the wheel, the better. Of course, being able to work with Gere (Kennon) and all of the guys at Donnie Wilson’s with Bond (Suss) and all of them would be a great opportunity. They do really well with the Toyota TD2/TRD program. Everyone that has gotten behind the wheel has definitely been fast in their supers and have been able to win races. I would love to do it. Don’t know if would be with them or with our NEMCO Motorsports team. We still have some late models there. I think there is one or two that we haven’t converted to a road race car, so who knows.”

“I do think there will be some things that can transfer from lines and laps and how the track rubbers up. Definitely cars on track this weekend, as far as the 20-minute practice deal and then qualifying and then the Truck race going into the Xfinity race. I think there is some value with that. I think just being out there on Friday night could definitely help for Saturday. I also definitely think after only 20-minutes of practice and Truck qualifying, being able to go and practice the Xfinity car and qualify the Xfinity car right before the Truck race will definitely help me as well. Vegas has been really good to me. I’ve been runner-up there I think once or twice in the Xfinity car, so I’m looking forward to getting behind the wheel for Sam Hunt (Racing) and everyone at Toyota this weekend. We have Berry Bullets on board, so look forward to trying to make them proud, local company there. They are a long-time supporter of mine, so hopefully we can get them the victory on Saturday and get Mobil 1 a victory on Friday night.”

Do you utilize the Toyota Performance Center?

“I train every day at the Toyota Performance Center. It’s a really neat facility that Toyota and TRD have been able to put together for us. It’s up to us drivers that are underneath the Toyota banner and underneath the TRD banner on how we want to utilize that program and how we want to make the most of it. I definitely feel like being there – I’ve learned a lot from being there. I feel like I’ve also brought some other things I’ve learned over the years from being with Josh Wise, kind of being his little protégé for a couple of years before that deal took off and then some other things I’ve done on my own. I feel like it’s a really good facility and it just continues to get better and better every single week and every year.”

What keeps you going back to the Performance Center when you are training with younger drivers?

“I think there is two ways to look at that question. Yes, you can have the attitude that I don’t want to be around younger kids or whatever it may be, but when I’m at the gym – I’m focused on my task at hand and training to my absolute top ability. I feel like I tend to push those younger kids when they are at the gym. When they may be complaining, I’m over there sweating my head off and just continuing to push through whatever it may be and working really hard. Being 24 and being able to be in the KBM (Kyle Busch Motorsports) stable, I’m kind of that veteran driver as well underneath that banner right now at 24, which is kind of crazy. Being able to have Chandler (Smith) and Corey (Heim) there and them being younger, I feel like we can have dialogue and different things of that sort. It’s pretty unique in the sense of training with some of the kids. Sometimes I’m on my own, sometimes they are there. It just depends on the day and the schedule and how everything is going on. Everyone gets along really well I feel like in the Toyota camp and we just push each other. You have to continue to push each other to be the best that you can be on and off the racetrack.”

How do you utilize mental support versus the physical support that they have there for you?

“I think that I learned that mindset and everything about the brain from my time when I was with Josh Wise. We focused a lot on that. Being able to train the brain is just like training the body. Your brain can tell you one thing and your body can go past what it’s telling you and you pass that. I think you see a lot of that in the endurance world from running triathlons, Ironmans, whatever it may be. You are just continuing to push until your body basically shuts down. I like being able to train the brain. I like exercising it – doing different things. At the end of the day, when I get done with a workout and training, I want to be mentally, physically, everything exhausted. If you are not, it’s hard to say that you pushed yourself that day. I think there is a lot of benefit to training the brain as well as the body. Our races, they are physically demanding, but at the same time, they are mentally demanding as well. You have to focus and try to hit the same line for two hours, three hours, four hours and you can’t mess up. When you are running at Daytona and you’re running within a couple of feet of cars all day, you don’t want to make a mental mistake and end up wrecking the whole field. The answer is yes. Utilizing that is very beneficial.”

Did you send Bernard Pollard diecast after your Twitter conversation?

“Yes, he dm’ed me. I got some information, and there was a diecast that went out this week. He will receive it soon.”

Are you expecting any aerodynamic changes with the new Toyota body?

“I haven’t been involved in a lot of the technical side of the different body. I know that the Toyota Tundra TRD Pro looks really good. It looks mean on the racetrack and with the production vehicle as well. Not really sure on what to expect if there will be a huge difference aerodynamically from them being at the wind tunnel, and having it blown in the wind tunnel, I haven’t seen numbers. I figure if there would have been a big difference, we probably would have talked about it as far as crew chief, driver. Who knows? Hopefully it is better. Anytime they come out with a body change I feel like Toyota and all of the other manufacturers put a lot of work in to try to make the trucks better and more aerodynamic and try to figure out how to get more downforce in them. I’m excited. Hopefully we can take the Toyota Tundra TRD Pro to victory lane for the first time this weekend.”

Is there any extra motivation when you are racing against Kyle Busch?

“I don’t think there is extra motivation. Him and I actually had a conversation about this a few weeks ago. I don’t think there is any extra motivation. When you look at last year, we won three of the five races he was on and then all of the races that he wasn’t in we won two out of 18 of them. It’s a little bit different mindset I would say for us going into this year but looking forward in having the opportunity to race against Kyle (Busch). Anytime that you are able to race against him or any of the other Cup guys, you are always learning something. They always have a lot of knowledge, and they have a really big notebook that they can pull from different moves and information. I think one of the best things is when he races, we are able to sit down and debrief after the race and I can pick his brain and he can pick my brain and figure out who was better where, what was different set-up wise in our trucks, what we both fought all night, looking at pit road statistics. There is a lot of different things we can look at and bounce off each other. You know you have a gauge when he comes down and runs. He’s going to maximize everything he possibly can.”

Have you thought about how you are going to approach the new practice format?

“Not really, approach it the same as last year – as if you didn’t have practice. You’ve got to be really close, set-up and balance wise, unloading right off the truck. If you are not, there is not much you can change anyway to try to fix it. Hopefully your set up is good. Hopefully your simulation tools were really good going to the racetrack. Hopefully the notebook has been good from the past and you didn’t make any mistakes. Hopefully we played everything right and we brought a fast truck to Vegas and for the rest of the year where we have practice like that and qualifying. I think the qualifying adjustments compared to where you are in practice and race balance is going to be interesting to see who hits it right off the bat and who struggles with it. I know we struggled with it last year at Nashville and Phoenix, really the only two places that we qualified. I feel like we have a better grasp on that now of what we did and what we did wrong, so hopefully we can continue to build on that and go and qualify better than we have.”