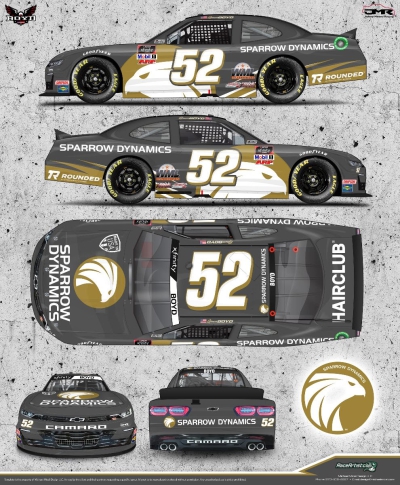 Spencer Boyd Racing announced today that Sparrow Dynamics will be the primary sponsor aboard the No. 52 Camaro of Jimmy Means Racing for the NASCAR Xfinity Series race at Martinsville Speedway on October 30.  Sparrow Dynamics adds yet another ‘Made in the USA’ company to Boyd’s list of patriotic sponsors.

Spencer Boyd commented on the partnership, “Sparrow’s Instagram profile says ‘Protecting Freedoms Through Innovative Arms Accessories’.  Most NASCAR fans know I love freedom so anyone protecting that is good in my book.”

Sparrow Dynamics manufactures unique AR parts and also compliant parts for firearms owners dealing with unconstitutional laws in restrictive states.  They dedicate much time and resources supporting pro second amendment groups and encourage others to do the same.  Visit their website www.sparrowdynamics.com to learn more.  For over 18 years the owners have understood the importance of constant improvement in all aspects of their work, but more importantly, the greater impact they can have outside of daily business.

“We love that Spencer wears American Flag socks,” laughed Larry Livingston, Chief Engineer for Sparrow Dynamics.  “We wanted a partnership in a sport that exudes American pride and with an athlete that values freedom.  We are looking forward to supporting Spencer at Martinsville where there is freedom and nail-biting racing victories today, because of difficult and hard-fought victories of the past.”

Martinsville Speedway is the track where Spencer started his NASCAR career back in 2016.  He will be pulling double duty on Halloween weekend running both the NASCAR Camping World Truck Series race in the No. 20 for Young’s Motorsports and the NASCAR Xfinity Series race for Jimmy Means Racing.  Spencer’s best finish at Martinsville across all series is 15th (twice) where he’ll be looking to improve upon in the Sparrow Dynamics No. 52 Camaro.

The NASCAR Xfinity Series race, Dead on Tools 250 at Martinsville Speedway, can be seen live on NBCSN or heard on the Motor Racing Network beginning at 6:00pm ET on Saturday, October 30.