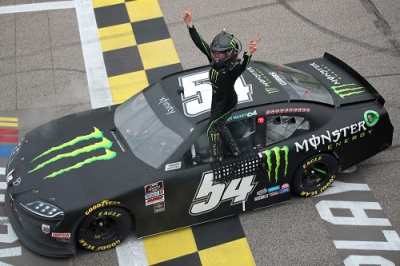 Ty Gibbs grabbed win No. 4 on Saturday at Kansas Speedway piloting the No. 54 Toyota for Joe Gibbs Racing. Gibbs, also looking to score the 2021 ARCA Menards Series championship later Saturday at the 1.5-mile track, led 15 of the 200 circuits.

AJ Allmendinger rounded out the top three finishers. Allmendinger started the day in fifth and led 10 total laps and leaves with his 21st top 10 this year.

There were 10 caution flags throughout the race that impacted a couple of Playoff drivers. On lap 98, Noah Gragson, Myatt Snider and Daniel Hemric tangled on the backstretch. All cars involved continued.

Sam Mayer, Noah Gragson and Harrison Burton tangled on the frontstretch to bring out the final yellow with 20 to go. The incident wiped out Gragson and Burton, respectively, while Mayer continued.

The next race for the NASCAR XFINITY Series will be at Martinsville Speedway on October 30th. Coverage of the event will air live on NBCSN and MRN Radio.