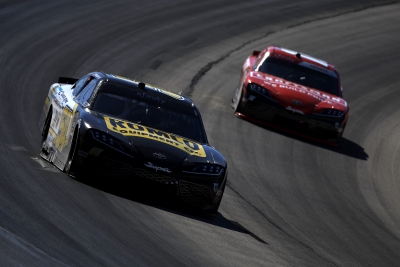 The NASCAR Xfinity Series Playoffs continued at Texas Motor Speedway today, as the Round of 8 kicked off. Surprisingly, none of the 8 drivers fighting for the championship title claimed the win at Texas. Instead, John Hunter Nemechek stole the checkered flag at the end of the 200-lap event. The victory marks Nemechek’s second career Xfinity Series win.

Last week’s winner, AJ Allmendinger, lead the field to green to begin stage one of the race. Allmendinger maintained his lead until Cindric used a slower car ahead as a block to steal the lead on lap 14. Cindric lead until the competition caution appeared, as scheduled, on lap 20. After a chaotic restart, the yellow flag waved again within a short lap back under green. Both Landon Cassill and C.J. McLaughlin suffered from mechanical issues. Meanwhile, the No. 8 of Sam Mayer and the No. 10 of Jeb Burton both sustained damage after they got stacked up on the restart.

After the second caution of the day, the race returned back to green, and Cindric was able to stay out front. The next yellow flag waved with only six laps remaining in stage one. JJ Yeley’s mechanical issue was the root of the caution.

A two-lap shoot out ended stage one with Austin Cindric picking up the stage win.

Daniel Hemric led to begin stage two until lap 55. Lap 55 saw the fifth caution of the day for debris on the track. Hemric led once the race returned back to green, but his lead was halted yet again on lap 65. Ryan Sieg’s spin was the cause of the yellow flag.

Back in action, the battle for the lead heated up between Daniel Hemric and John Hunter Nemechek. Nemechek ended up on top and went on to win stage two.

On pit road, both Gragson and Allmendinger had to make two separate pit stops. Gragson wanted to double-check lugnuts for a vibration he felt, while Allmendinger’s team needed to regather after a rocky initial pit stop. Meanwhile, Justin Haley faced a penalty for an uncontrolled tire.

Nemechek continued leading to begin stage three until the caution flag flew on lap 99 for an incident involving Tanner Berryhill, Dylan Lupton, and Jade Buford. Despite all of the breaks in the race, Nemechek stretched his lead off each restart.

The ninth yellow flag of the day appear on lap 142 for CJ McLaughlin. Under green, Hemric became the leader as Nemechek was sent to the rear for a penalty on pit road. Hemric remained out front until a caution came out with less than 30 laps to go for a spin from Brandon Brown.

Because of his two-tire strategy on pit road, Nemechek regained his position out in front of the field following the tenth caution of the day.

Behind Nemechek, Hemric trailed by 1.3 seconds to claim a runner-up finish, his tenth second-place finish in the series. Gragson, Allgaier, and Cindric made up the remainder of the top-five.

The Xfinity Series will be back in action next Sunday, October 24th at 3 PM. Be sure to tune into NBCSN to catch all the action from Kansas Speedway.