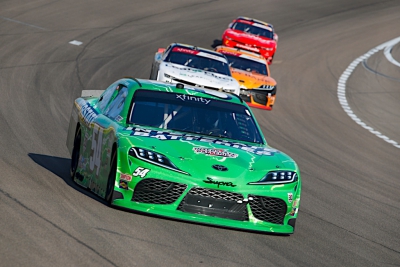 ● The Interstate Batteries driver picked up a pair of positions in the opening two laps and moved into the top-three by lap 14 despite reporting that he was fighting a tight condition from the center of the corner through the exit. He fell to fourth by the lap-25 competition caution, stayed on track and restarted in the same position when the race went back to green on lap 30.

● The first incident-related caution flag flew on the restart lap for a multicar accident behind Gibbs in turns one and two. Again, the Interstate Batteries driver stayed on track and restarted second on lap 40.

● Gibbs dropped a pair of positions on the restart lap but held onto fourth place to the end of the stage. He pitted during the break.

● The Interstate Batteries driver picked up a position by the time a two-car incident in turn two brought out the caution flag on lap 55. He stayed on track and restarted sixth on lap 59.

● The tight condition had persisted throughout the second stage with slight improvement thanks to changes made during the first break. Gibbs held his relative position and was seventh by stage’s end. He pitted during the break.

● The Interstate Batteries driver held onto the fourth spot until a two-car incident in turn three brought out the caution flag on lap 120. Gibbs reported that his racecar was now a bit free on corner exit. He pitted for four tires and fuel and adjustments and restarted second on lap 125.

● Gibbs was holding down the fourth position when he was called to pit lane on lap 177 under green for the final scheduled fuel-and-tire stop. The crew made a track-bar adjustment to try and remedy the free condition on corner exit. Gibbs was flagged for speeding while entering pit lane and had to serve a drive-through penalty two laps later, dropping him back to 13th and off the lead lap.

● The Interstate Batteries driver picked up a pair of positions on his way to the checkered flag.

● Josh Berry won the Alsco Uniforms 302 to score his second career NASCAR Xfinity Series victory, his second of the season and his first at Las Vegas. His margin over runner-up Justin Allgaier was 4.398 seconds.

● There were six caution periods for a total of 32 laps.

“I feel like we had a really good Interstate Batteries Toyota Supra. We kind of chased the balance and got it really good at the end. Just wheel-hopped and came into pit road on my green-flag stop and totally blew it. It was 100 percent my fault. Just my fault and frustrating and I completely own it. We wouldn’t be here without everybody at Toyota and Interstate Batteries. Going to TRD helps my team out so much, just getting sim work done to prepare for these races. It really shows and I probably need to go more.”

The next event on the NASCAR XFINITY Series schedule for Gibbs is the Drive for the Cure 200 at the Charlotte (N.C.) Motor Speedway Roval on Saturday, Oct. 9. The race begins at 3 p.m. EDT with live coverage by NBC and SiriusXM NASCAR Radio.