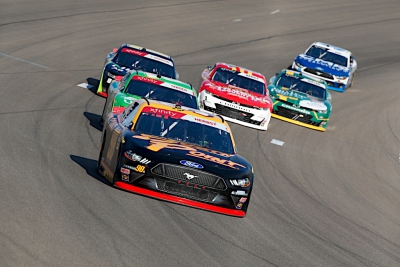 As the intensity of the playoffs heated up in the Nevada desert, Riley Herbst’s return to his hometown was cut short after only 31 laps in Saturday’s Alsco Uniforms 302 at Las Vegas Motor Speedway. The third-generation driver and the No. 98 South Point team started 10th when the green flag waved for the 201-lap race. Despite reporting that his Ford Mustang was loose, Herbst still felt the car had the speed to run up front. He stayed in the top-10 for a majority of the opening laps. Under the lap-25 competition caution, Herbst reported that there was still no rear grip, but his racecar was fast in turns one and two. Like the leaders, the No. 98 South Point team opted to keep its driver on track during the caution. Misfortune hit on the lap-30 restart as Herbst and the field was making its way through turns one and two. The 22-year-old driver was caught up in a four-wide situation when left-rear contact turned his racecar sideways. Multiple cars were involved and the damage sustained was too much for Herbst and his playoff-contending team to continue. They ultimately had to settle for a 33rd-place finish.

Riley Herbst, driver of the No. 98 South Point Ford Mustang for Stewart-Haas Racing:

“I think that accident occurred because of old tires and a slick track. Everybody kind of spun their tires a little bit. I know the 2 behind me got a better run than I did into turn one, so I tried to shade down and give him the room he deserved because he got to the restart box better than I did. I jumped to the outside and tried to block a little bit and then gave it back to him. Four-wide into turn one doesn't usually work out here at Las Vegas Motor Speedway. That’s a real bummer. We fired off pretty loose but I thought we would get the South Point Ford Mustang better and have something to contend with. Now we will have to go to Talladega and who knows what will happen.”

● Josh Berry won the Alsco Uniforms 302 to score his second career NASCAR Xfinity Series victory, his second of the season and his first at Las Vegas. His margin over runner-up Justin Allgaier was 4.398 seconds.

● There were six caution periods for a total of 32 laps.

The next event on the Xfinity Series schedule is the NASCAR Xfinity Series Playoff Race on Saturday, Oct. 2, at Talladega (Ala.) Superspeedway. The race starts at 4:30 p.m. EDT with live coverage provided by NBCSN and SiriusXM NASCAR Radio.