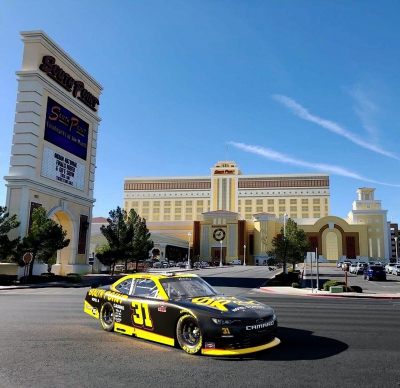 “I’m extremely grateful for the opportunity to get back behind the wheel in the NASCAR Xfinity Series,” said Dillon. “Jordan’s program has had strong runs this season and I look forward to continuing what his No. 31 team has been able to put together so far. It’s cool to honor Brendan Gaughan in his hometown and sport the South Point Hotel and Casino’s colors once again in my career. Back in 2012 when I made my first Xfinity Series start, South Point was the sponsor on my car and what Brendan and his family have done and continue to do for our sport is worth celebrating.”

Having competed in the NASCAR Cup Series (NCS) full-time and partially for the last eight seasons, the Lewisville, North Carolina native holds 166 NCS starts to his credit. In those starts Dillon has collected two Top-5’s and six Top-10 finishes.

Starting Dillon’s ladder progression to NASCAR’s top-level, the now 29-year-old claimed the 2012 NASCAR Camping World Truck Series (NCWTS) Sunoco Rookie of the Year (ROY) title with one win, an impressive seven Top-5’s and 17 Top-10 finishes. Dillon backed up his first year by claiming two wins, nine Top-5’s and 12 Top-10’s the next season on the way to being the 2013 NCWTS Championship Runner-Up.

Prior to moving to the NCS full-time, Dillon would spend three seasons in NXS competing for a Championship. In his rookie season Dillon would capture runner-up honors to Chase Elliot in the NASCAR Xfinity Series (NXS) Sunoco Rookie of the Year standings after a fierce battle all season long claiming one win, seven Top-5’s, and 24 Top-10’s.

The following season would see Dillon grab 12 Top-5’s and 25 Top-10’s in claiming third in the 2015 NXS championship point standings. In his last full-season driving in NXS Dillon would earn nine Top-5’s and 17 Top-10’s with a career best five second place finishes. NASCAR would move to the Chase format in 2016 for the point standings, making the chase Dillon would be eliminated from the final round in a close battle with Justin Allgaier. Ultimately, finishing fifth in the season long standings.

“Ty is a very experienced driver who will be able to step into the seat and instantly put the team in a position to compete towards the front. We first raced against each other in Legends cars over ten years ago – so this is really cool to see this opportunity come full circle.” Stated JAR President Jordan Anderson.

“It’s been incredibly fulfilling to have an opportunity to assemble a lineup of drivers that have been able to show the ability of our equipment and team. As we continue to build our relationship and program with the equipment from RCR and engines from ECR – it’s exciting to see the potential that the future has in store for us all. We’re also incredibly honored to welcome South Point Hotel and Casino on board this weekend. South Point and the Gaughan family have been a proud supporter of many race teams throughout the years, and they do a great job making the teams feel like they are at home during the race weekend.”

South Point Hotel is also home to the Tournament Bowling Plaza, a multi-million-dollar professional bowling tournament facility. In addition, South Point Hotel has the finest equestrian event facility in the country. The 240,000 square feet of event space features three climate-controlled arenas, vet clinic, feed store, more than 1,200 climate-controlled stalls and plays host to some of the country’s most unique events.