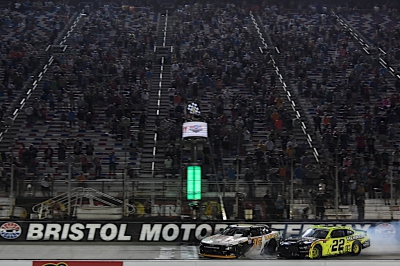 If was a fast and furious dozen or so laps with Gragson out front over the field but hot in tow on the bumper was Daniel Hemric who made it past for the lead after a several lap battle trying to keep Justin Allgaier behind him.

However, within laps Moffitt slammed the wall in turn two after a tire went down sending him to pit road and ending his night early on.

As the field got rolling once again following the first caution of the night it was Daniel Hemric with the launch on the outside line dragging Justin Allgaier with him around Gragson.

Yet as Hemric caught up to the rear of the field and working traffic Hemric got held up by Jade Burford giving Allagier the jump he needed to take over the lead. Allgaier would stay in control through the remaining laps to win stage one.

Just as the race started to get into a mid-race rhythm two back-to-back caution slowed the field. First for Tommy Joe Martins and McLeod tangling followed up quickly by Mills and Boyd tangling up sending Mills spinning and knocking him out of the race for the night.

While under caution Mills viably upset with Spencer Boyd after exiting his No. 99 machine, first attempting to throw a water bottle that caught the tow truck instead, then stands next to the track giving the middle finger to Boyd as he drove by before getting in the truck for his ride to the care center.

With halfway closing in Hemric once again got hung up by Jade Buford allowing Allgaier to get past for the lead but his lead wouldn’t last long while battling lapped traffic lost it and drifted down the frontstretch before finally gathering it back up but not before Hemric was able to make his way back around for the lead bringing Noah Gragson with him for second.

That pass for the lead would allow Hemric to hang on to win stage two.

As laps began to fade and quick caution for a tangle between Tommy Joe Martins and David Starr once again slowed the pace for the ninth time of the night. With the green flag back in the air Sam Mayer who had a rough ARCA and Truck event bounced back with the lead over Brandon Jones and Justin Allgaier.

The battle up front with Cindric out in the lead saw Allgaier and Mayer doing battle until Allgaier got into Mayer sending him spinning for the 10th caution of the night sending the event into NASCAR overtime.

Cindric and AJ Allmendinger both battling for the regular season championship lined up on the front row both drawing even to the white flag when chaos struck coming to the line. With Cindric trailing by a half car length going into the final corner Cindric and Allmendinger trading paint out of the corner seeing the two cars sliding sideway across the line for the checkered flag.

But it didn’t end there as the cars slid down the track a pile up including the race winning car of Allmendinger slammed the wall with several other cars including Cindric piling up in the accident.

When the smoke cleared AJ Allmendinger hopped out of the car and made his way to the care center where he was released for his interview. But after Cindric who was able to drive his car back to pit road and got both booed and cheered in his post-race interview.

"What happened on the last lap?  The short summary is short track racing.  The long summary is a lot of contact.  Five-star bodies definitely made their money’s worth today.  I’m surprised we were able to not cut a tire down in that situation, but just a lot of hard racing, a lot of guys wanted to win the race." Said Cindric

The series now moves onto Las Vegas Motor Speedway next Saturday, September 25th at 4:30 p.m. on NBCSN for the Alsco Uniforms 302.