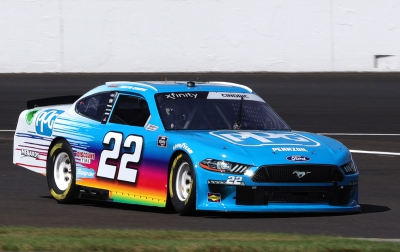 With only one prior Xfinity Series start on the Indianapolis Motor Speedway Road Course, the track remains fresh, new, and challenging to the drivers. However, the road course was no challenge for road course aficionado Austin Cindric, who ultimately wound up in victory lane. Austin Cindric led 29 laps en route to his Pennzoil 150 win. This marked his fifth win of the 2021 season.

“Unbelievable," said Cindric. "First, I have to thank Roger Penske for this opportunity. I am so proud to be part of this Penske family. With my family history, this place means so much to me."

Prior to the drop of the green flag, the starting lineup was set by qualifying. AJ Allmendinger bested Austin Cindric for the pole position by a mere 0.327 seconds. However, Justin Haley quickly blew by Allmendinger during the first lap of the race as Allmendinger went off in the grass.

The first caution of the day appeared on the second lap of the race. Preston Pardus’ inability to get restarted was the cause of the yellow flag. Brandon Jones, Brandon Brown, Josh Bilicki, Kevin Harvick, and Harrison Burton all also suffered various degrees of damage from a chaotic start to the race. Ultimately, Harvick, Jones, Pardus, and Brown were all forced to retire for the day.

With only 6 laps to go in stage one, Will Rodgers spun but did not bring out the yellow flag. However, one lap later the yellow flag waved for debris off of Ryan Sieg’s tire. Austin Cindric was leading at the time of the caution, after passing Haley a few laps prior.

After 20 laps of competition, stage one came to a close. Justin Haley won this stage and the ten points associated with it.

Brett Moffitt was forced to the garage at the beginning of the second stage. Under green, Chase Elliott and Kris Wright both went for spins, but there was no caution. The damage from the spin brought Wright’s day to an end. Meanwhile, Ty Gibbs and Daniel Hemric suffered from major tire rubs.

Austin Hill’s inability to get rolling on lap 29 caused the fourth caution of the day. Back under green, Noah Gragson stole the lead off the restart. Quickly, the leader changed again as Allmendinger cleared Gragson. Shortly after the intense battle for the lead, Austin Dillon spun under green but did not bring out the caution.

The fourth incident-related caution of the day came on lap 39 for Will Rodgers, who was stalled out on the frontstretch. On lap 40, Allmendinger maintained his lead to claim the stage two victory under the yellow flag.

Ty Gibbs initially led to begin the final stage of the race, but Cindric soon reclaimed his lead with 18 laps to go. Just a lap later, Sam Mayer went for a spin and sustained heavy damage that ended his day. Later, on lap 53, Spencer Pumpelly was spun by Jeb Burton. Pumpelly was able to continue on.

After 62 laps of racing, Cindric reached the finishline a solid 2.180 seconds ahead of runner-up AJ Allmendinger. Meanwhile, Justin Haley, Chase Elliott, and Noah Gragson rounded up the remainder of the top-five.

The Xfinity Series will be back in action next Saturday, August 21, at 3:30 PM ET. Be sure to tune into NBCSN to watch all of the race coverage from Michigan International Speedway.