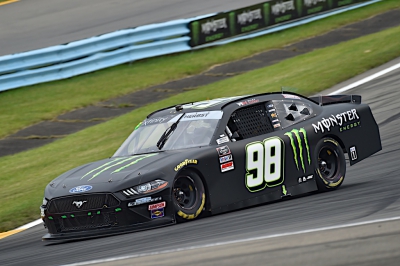 After a roller coaster ride of a race at Watkins Glen (N.Y.) International, Riley Herbst and the No. 98 Monster Energy team brought home a 13th-place finish in Saturday’s NASCAR Xfinity Series 200 at The Glen. The 22-year-old Herbst started 10th at the 2.45-mile, seven-turn road course and quickly moved his way up to ninth, where he finished Stage 1 to earn two bonus points. After pitting during the stage break for four tires, fuel and an air pressure adjustment, Herbst restarted Stage 2 in 16th. He worked his way up to 12th by the lap-33 caution. The team stayed out during the caution to gain track position. The strategy paid off, and Herbst finished sixth in Stage 2 to earn an extra five bonus points. In the final stage, the No. 98 Monster Energy Ford Mustang restarted 19th and broke into the top-15 by lap 47. Herbst was running 14th when the caution came out on lap 49. Unfortunately, the team was hit with a speeding penalty while making their fuel-only pit stop, forcing Herbst to restart at the back of the field. Herbst was a man on a mission on the lap-51 restart. The Las Vegas native gained 22 spots and made it all the way up to ninth before another yellow flag flew just 17 laps later. Crew chief Richard Boswell made the call to bring his driver down pit road for four fresh tires and fuel for the team’s final stop of the race. Herbst continued to make up lost ground as the laps wound down. On the final restart of the race on lap 79, a spin in front of the No. 98 Monster Energy Ford Mustang forced Herbst to fall back in the field to 17th. He made up a majority of those lost spots in the final three laps to finish 13th and score his 10th top-15 of the season.

“That just wasn’t the day we had hoped for at Watkins Glen. We had a top-10 car but made a mistake that put us back in the pack in the final stage. It’s so hard to pass here, and we just got stuck. We made up some ground in the playoff standings, but we still have work to do. We’ll take what we learned here and move on to Indy.”

● Ty Gibbs won the NASCAR Xfinity Series 200 at The Glen to earn his third career victory, his third of the season and his first at Watkins Glen. His margin over second-place AJ Allmendinger was .948 of a second.

● There were eight caution periods for a total of 15 laps.

● Twenty-eight of the 40 drivers in the NASCAR Xfinity Series 200 at The Glen finished on the lead lap.

The next event on the Xfinity Series schedule is the Indianapolis 150 at the Brickyard on Saturday, Aug. 14, on the Indianapolis Motor Speedway Road Course. The race starts at 4 p.m. EDT with live coverage provided by NBCSN and SiriusXM NASCAR Radio.