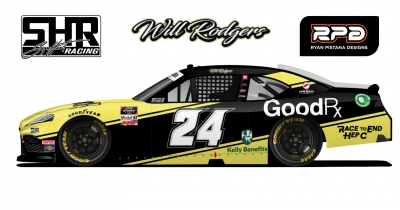 For the first time in the team’s young history, Sam Hunt Racing (SHR) will field two entries in a NASCAR Xfinity Series event. SHR will field the No. 26 and No. 24 Toyota Supras in the Pennzoil 150 at the Brickyard at the Indianapolis Road Course with drivers Kris Wright and Will Rodgers. Wright will be behind the wheel of the No. 26 Sam Hunt Racing Toyota Supra. Rodgers will pilot the No. 24 GoodRx / RaceToEndHepC.com Supra.

“It’s definitely an exciting milestone, and more so just a testament to how committed this group is when it comes to growing and taking the next step for our program,” said Sam Hunt. “We’ve been discussing debuting the 24 car for a while, but we wanted to make sure the opportunity and timing were right when we made the decision. Having Will be the first to roll out with the 24 number is really special, and I’ve got no doubts he’ll make us proud. Will and Kris will be able to utilize each other and should both run strong.”

Kris Wright, a 27-year-old former IMSA Prototype Challenge LMP3 champion, is signed to run all road course races with SHR this season. The Indianapolis Road Course will be his sixth race with SHR in 2021. 26-year-old Will Rodgers is fresh off a 14th-place finish in his season debut at Nashville Superspeedway — his first start in the series since 2019.

“Heading into Indy, I’m mostly looking forward to being back on a road course...but this time, in the best equipment I’ve ever been able to get in,” Rodgers said. “I’ve never raced at Indy, but I know this type of track suits my driving style and always puts on a really great show. After a successful run at Nashville, I think it will be easier to carry the momentum built into Indy. I now have the first race with this team under my belt, and I think we’re all on a very similar page when it comes to performance on the track and off. These experiences should only help us focus on the task at hand — to run as well as possible.”

Sam Hunt Racing has the honor of having multiple young drivers behind the wheel this season including Will Rodgers, Kris Wright, Santino Ferrucci, John Hunter Nemechek, Brandon Gdovic, and Colin Garrett. The effort and determination of each driver have been fundamental to the team’s growth in its first full-time season. Heading into the Indianapolis Road Course with two cars is a landmark for the team.

“Kris and Will are both vital to our growth at SHR,” said Sam. “Kris has been with us since the beginning of the year, he’s relatively brand new to stock cars and has learned so much in a short amount of time. I’ve known Will for a long time. I’ve always had respect for him as a racer and am so happy he’s continuing his career with me. Both of them are great competitors, and both are still rookies in the Xfinity garage. My hope is that they work well as teammates and learn from each other as much as they can. We are proud to have them both,” said Hunt.