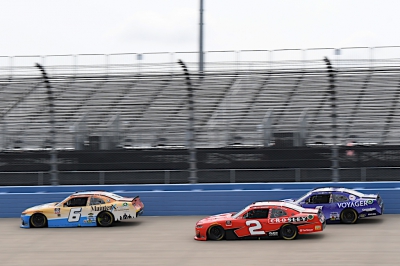 Saturday, June 19th, marked NASCAR’s return to Nashville Superspeedway for the first time since 2011. Drivers Landon Cassill, Jeffrey Earnhardt, Colby Howard, and Ryan Vargas entered the weekend with anticipation as they all looked to race at the newly renovated 1.33-mile concrete track.

Ryan Vargas, driver of the No. 6 MaintenX Chevrolet, had Nashville marked on his calendar as a potential spot to shine. Vargas was able to gain valuable track time with a rare practice session that set him up for a 28th place qualifying effort. From the start, the rookie driver faced a difficult challenge with an ill handling car. Ryan finished 34th in Stage 1, but the crew continued to work on his Camaro throughout Stage 2, netting him five spots to finish 29th. As the final stage rolled onwards, Vargas began working his way back through the field. The rookie crossed the line in 18th place, a respectable run that should help build momentum heading into Pocono.

Landon Cassill, driver of the No. 4 Voyager Chevrolet, opened the Nashville race weekend with high hopes after announcing his primary sponsor would be onboard his Camaro for the rest of the season. Cassill had made two starts at the track in his rookie season with a best finish of ninth, so the veteran was looking forward to a solid return. Landon qualified 25th and ran a quiet race throughout the first two stages, finishing 29th in Stage 1 and 26th in Stage 2. As the race neared its conclusion, Cassill had found himself inside the Top 15 with some great strategy calls, but with less than ten laps to go, his race ended due to contact from another vehicle. The battered No. 4 was scored with a 29th place finish.

The NASCAR Xfinity Series season heads to Pocono Raceway this weekend for the annual stop at “The Tricky Triangle”. Fans can watch the Pocono Green 225 Recycled by J.P. Mascaro & Sons live on NBCSN at 12:00 PM ET on Sunday, June 27th. For all things JD Motorsports, follow along on our social media pages @JDMotorsports01 and visit the team’s official website at www.TeamJDMotorsports.com #TeamJDM