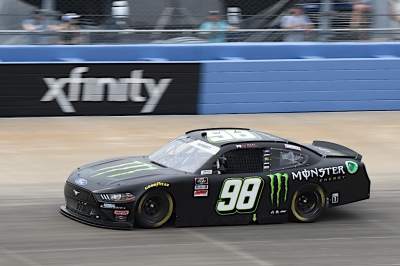 Riley Herbst and the No. 98 Monster Energy team persevered to finish 10th in Saturday’s Tennessee Lottery 250 at Nashville (Tenn.) Superspeedway. After starting 20th, the No. 98 Monster Energy driver climbed his way into the top-15 by lap 39 and kept that position until the end of Stage 1. After pitting at the stage break for four tires, fuel, and an air pressure adjustment to help combat a tightening racecar, Herbst restarted the second stage 10th. The 22-year-old driver struggled with grip as the stage progressed but was still able to finish it in 13th. In the final stage, the team was hit with two pit road penalties, but it was determined to overcome both and made it back into the top-10 by the closing laps, its fast Ford Mustang able to pass cars on green-flag runs, and weathering numerous incidents, as well. Herbst was running eighth when the final yellow flag flew on lap 181 that set up the green-white-checkered finale. The team opted to restart in the preferred line while maintaining its eighth-place position. Herbst ultimately brought home the Monster Energy team’s fourth top-10 of the 2021 season.

“It was a long day. We came from the back twice. I felt like we had a pretty decent long-run racecar, it’s just that we couldn’t get the long run at the end and cycled too tight at the last restart. It’s cool to get a 10th-place and some good points for the playoffs. We’ll head to Pocono.”

● Kyle Busch won the Tennessee Lottery 250 to earn his milestone 100th career victory, his third of the season and his second at Nashville. His margin over second-place Justin Allgaier was 1.110 seconds.

● There were eight caution periods for a total of 46 laps.

● Twenty-two of the 36 drivers in the Tennessee Lottery 250 finished on the lead lap.

● Austin Cindric remains the championship leader after Nashville with a 90-point advantage over second-place A.J. Allmendinger.

The next event on the Xfinity Series schedule is the Pocono Green 225 Recycled by J.P. Mascaro & Sons on Sunday, June 27 at the Pocono (Pa.) Raceway. The race starts at 12 p.m. EDT with live coverage provided by NBCSN and SiriusXM NASCAR Radio.