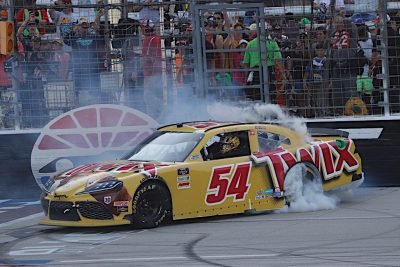 Busch, who led 94 of the 171 lap race, pulled away during an overtime restart to win on Saturday.

Busch, who is the all-time winningest driver in the NASCAR Xfinity Series will have the chance to score his 100th Xfinity Series victory next Saturday at Nashville Superspeedway.

Rounding out the top five were Justin Allgaier in second, Austin Cindric in third, Daniel Hemric in fourth and Brandon Jones in fifth.

Rounding out the top ten were AJ Allmendinger in sixth, Noah Gragson in seventh, Brett Moffitt in eighth, Justin Haley in tenth and Michael Annett in tenth.

The NASCAR Xfinity Series will return to Nashville Superspeedway next Saturday at 3:30 p.m. Eastern on NBCSN.