Herbst a Dissapointing 21st at Mid-Ohio 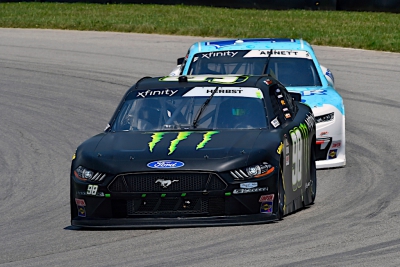 Riley Herbst and the No. 98 Monster Energy Ford team saw their bid for the season’s third top-five finish foiled when Herbst’s Mustang was nudged off the track during the closing lap of today’s race at the Mid-Ohio Sports Car Course in Lexington. The 22-year-old Las Vegas native took the green flag in fourth place for today’s green-white-checkered finish and held his position as the field took the white flag. He was caught up in a cluster of cars while negotiating the esses on the backstretch and, while gathering control of the Monster Energy Ford, Herbst found himself alongside Andy Lally, who nudged him off track under braking for the right-hand turn nine. Herbst rejoined the race and took the checkered flag a disappointing 21st. It ruined a potentially season-best result for the team and Herbst’s best career road-course finish. After starting today’s scheduled 75-lap race ninth, Herbst dropped out of the top-10 in the early going as incidents brought out the caution flag just two turns into the race and again on lap seven. After restarting 11th on lap 11, Herbst made steady forward progress and crossed the line seventh at the end of Stage 1. Under NASCAR’s non-competitive pit stop rules for this race, the Monster Energy team brought Herbst down pit road for a track-bar adjustment and fuel only on lap 26, and for four tires and air-pressure adjustments on lap 27 as he reported a significant loss of grip over the long run. He started 11th for Stage 2 and gradually worked his way up to fourth by stage’s end, again pitting twice during the break for identical changes to those that were made during the first break. Herbst restarted the final stage 17th and steadily gained positions from the drop of the green flag, reaching the top-10 by lap 67. The caution flag flew on lap 68 for multiple incidents with Herbst running ninth. He restarted in the same position on lap 71 and picked up a position to eighth by the time the caution flag flew again for a multicar incident behind him before the end of the lap. That set up the final green-white-checkered finish.

“That was an unfortunate way to end the day after everything this Monster Energy Ford team did to give me a top-five racecar for my first race ever on this track. Things got a little bunched up there on that last lap. We found ourselves two-wide going around the right-hander and unfortunately we ended up on the losing end of it. It’s a shame because we had a top-five car and didn’t get the result to show for it. It stings, but we’ll just have to move on and focus on a solid run at Texas next week.”

● A.J. Allmendinger won the B&L Transport 170 to earn his seventh career victory, his second of the season, and his second at Mid-Ohio. His margin over second-place Justin Haley was .809 of a second.

● There were seven caution periods for a total of 23 laps.

● Austin Cindric remains the championship leader after Mid-Ohio with a 96-point advantage over second-place Allmendinger.

The next event on the Xfinity Series schedule is the Alsco Uniforms 250 on Saturday, June 12 at the Texas Motor Speedway in Fort Worth. The race starts at 4 p.m. EDT with live coverage provided by FS1 and SiriusXM NASCAR Radio.