Harvick a Strong Fourth at COTA 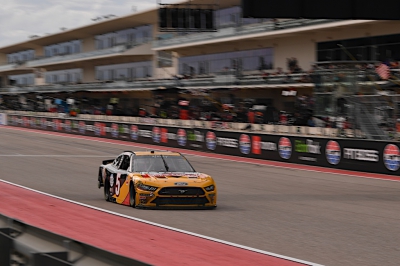 Kevin Harvick came into the inaugural Pit Boss 250 Saturday at Circuit of the Americas (COTA) in Austin, Texas, having never finished outside the top-10 in a NASCAR Xfinity Series race on a road course. He left the 3.426-mile, 20-turn layout with his streak intact after a strong fourth-place drive in his No. 5 Rush Truck Centers Ford Mustang for B.J. McLeod Motorsports. Harvick started 12th in the 46-lap race and steadily worked his way forward, finishing seventh in the first stage and ninth in the second stage. He lined up fourth for a late-race restart on lap 33, but fell to ninth shortly after the green flag waved. Harvick’s tenacity was on full display as he picked off five positions in the final 12 laps to claw his way back to fourth.

“The racetrack was fun. I got bounced around on that last restart, so I had to bounce my way back up through there and just got too far behind, so I took a second-place car and finished fourth with it, but these guys put in a lot of extra work on our Rush Truck Centers Ford Mustang to come and get all those laps and it’ll pay off. Whether it’s wet or dry I feel way more comfortable than when we started.

“There are a lot of passing zones and how the track changes from fall off and how you race and where you pass, a lot of wet. That’s the first time I’ve ever driven down a straightaway in a cloud of water this morning, so it was very interesting. I learned a lot of different things today.

“I got more than I wanted this morning with practice and qualifying – wet and dry and kind of wet, passing, restarts – just a lot of different situations. The first time I stepped foot on this racetrack was yesterday, so just have to thank everybody from Stewart-Haas and all of B.J. McLeod’s guys for helping us put all this together so that I could go out and be a 45-year-old rookie. I’m not top-end ready compared to some of those good guys, but I can survive and not make a fool of myself now.

“I think probably the most difficult part for me is turn two and carrying enough speed turn two to three, knowing how fast you can go into turn three and not screw up (turns) four, five, six and seven.”

●  This was Harvick’s 347th career NASCAR Xfinity Series start but his first since Sept. 1, 2018 at Darlington (S.C.) Raceway – a span of nearly three years.

●  This was Harvick’s 12th career Xfinity Series start on a road course. He has finished in the top-10 every time. His worst finish is merely a seventh-place drive at Watkins Glen (N.Y.) International on Aug. 12, 2006. Harvick has 10 top-five finishes highlighted by two wins – Aug. 4, 2007 at Circuit Gilles Villeneuve in Montreal and Aug. 11, 2007 at Watkins Glen.

●  Kyle Busch won the inaugural Pit Boss 250 to score his 98th career Xfinity Series victory and his first of the season. His margin over second-place A.J. Allmendinger was 11.024 seconds.

●  There were four caution periods for a total of seven laps.

●  Austin Cindric remains the championship leader after COTA with a 77-point advantage over second-place Harrison Burton.