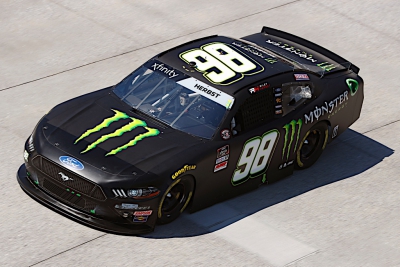 Riley Herbst’s race had barely begun in Saturday’s Dover 200 at Dover (Del.) International Speedway. On lap 33 of the 200-lap NASCAR Xfinity Series race at the aptly named Monster Mile, John Hunter Nemechek popped the back of Herbst’s bumper as the duo drove into turn three. Herbst’s No. 98 Monster Energy Ford Mustang spun around all the way to turn four, but Herbst was able to keep it off the wall and bring it to pit road. The crew changed right-side tires and returned Herbst to the track before Herbst came back to pit road for left-side tires and to fix some damage. This put the Monster Energy driver deep in the field, and a loose-handling racecar made forward progress all the more difficult. Crew chief Richard Boswell used a bit of strategy to gain some stage points, keeping Herbst out on the track to eventually crack the top-10. When the second stage ended, Herbst was 10th and had a valuable bonus point in his pocket. There were still 110 laps to go, however, and his racecar’s loose-handling ways persisted. Herbst ultimately went two laps down and finished the race in 17th.

“I was hoping for a better outcome, but we’ll learn what we can and keep going. We got spun early on and had to pit earlier than planned in the first stage. Then we just struggled to get the car right. At the end, we were battling for the Lucky Dog position and the caution just never came. We’ll turn our attention to COTA next weekend.”

●  Austin Cindric won the Dover 200 to score his 11th career NASCAR Xfinity Series victory, his third of the season and his first at Dover. His margin over second-place Josh Berry was 3.796 seconds.

●  Austin Cindric remains the championship leader after Dover with a 62-point advantage over second-place Daniel Hemric.

The next event on the Xfinity Series schedule is the Pit Boss 250 on Saturday, May 22 at Circuit of the Americas (COTA) in Austin, Texas. The race starts at 4 p.m. EDT with live coverage provided by FS1 and SiriusXM NASCAR Radio.