Dale Earnhardt Jr. and Unilever Honor 9/11 Victims with No. 8 United for America Chevrolet at Richmond 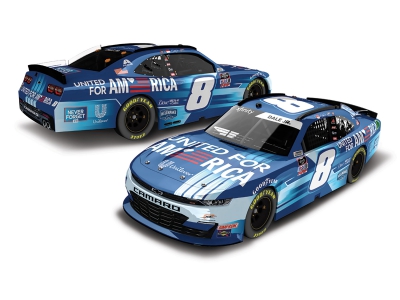 Never forget. That was the vow made by Americans following the tragic events of Sept. 11, 2001. JR Motorsports and long-time partner Unilever are standing united in that promise. Today, through a video release, JRM revealed Dale Earnhardt Jr.’s 2021 return to the No. 8 Chevrolet will come in the NASCAR Xfinity Series event at Richmond Raceway on Sept. 11 - the 20th Anniversary of the terror attacks - where the NASCAR Hall of Famer will drive a special United for America paint scheme honoring the victims of 9/11.

In the spirit of remembrance and reverence, Earnhardt Jr.’s United for America Chevrolet will mirror the 9/11 Memorial and Museum’s Tribute in Light, a powerful tradition that began in 2002 in New York. On the night of Sept. 11, from dusk to dawn, twin beams extend four miles into the sky above Manhattan, reflecting the shape and orientation of the Twin Towers. The No. 8’s blue-and-white paint scheme similarly features four spotlights representing the Twin Towers, the Pentagon and the Flight 93 Memorial site in Shanksville, Pennsylvania with the axiom “Never Forget” on the lower-rear quarter panel, paying tribute to the brave souls lost during the terror attacks.

“It’s hard to believe it’s been 20 years since that terrible day,” Earnhardt Jr. said. “The spirit of unity and togetherness our country felt on Sept. 11 is just as relevant now as it was then. I’m honored to be driving this car, and championing Unilever’s United for America program.”

This marks the third paint scheme associated with Unilever’s United for America campaign. The company also teamed up with JRM drivers Justin Allgaier and Noah Gragson to call attention to the fight against COVID-19 in the Carolinas and to acknowledge the first responders essential to the care needed in the wake of the pandemic. Earnhardt Jr.’s car will pay tribute to all those lost on Sept. 11, 2001, including first responders.

Created in May of 2020, United for America is part of Unilever’s continued commitment to serve the people and communities most impacted by the pandemic. In 2021, Unilever will take continued action to support women and families – particularly in Black and LatinX communities. As part of this support, Unilever will continue to provide millions of products and supplies to frontline partners like Feeding America, use its platforms to promote vaccine education in partnership with the Ad Council, and take continued action to support organizations that provide resources to female small business owners and youth, including Luminary and the Boys and Girls Clubs of America.

“We are happy to be working with JR Motorsports, Dale Earnhardt Jr. and NASCAR to honor those lost on Sept. 11, as part of our United for America initiative,” said Fabian Garcia, president of Unilever North America. “We are continuing to address the COVID pandemic issues and wish to inspire collective action to provide services and products to our hardest-hit communities.”

Earnhardt Jr.’s most recent NXS victory came at Richmond in 2016, giving the two-time champion 24 career NXS wins and four at the .75-mile oval. His return to the NXS in the No. 8 United for America Chevrolet will air on NBCSN on Saturday, Sept. 11 at 2:30 p.m. ET.