Henry Repeating Arms Joins Riley Herbst and the No. 98 Team at Darlington 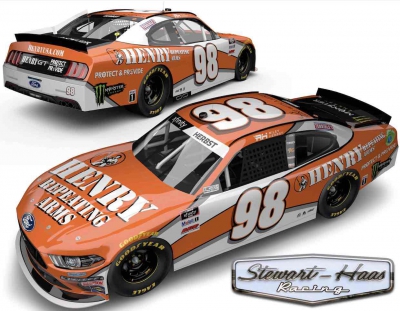 On Feb. 21, 1999 at North Carolina Speedway in Rockingham, a 27-year-old Tony Stewart was making just his second career NASCAR Cup Series start. He brought his orange-and-white Home Depot-sponsored racecar home 12th and was the highest finishing rookie in the 400-mile race. Three days later and 2,300 miles away, Riley Herbst was born in Las Vegas.

Stewart went on to become the series’ rookie of the year in a career that ultimately yielded three Cup Series championships and 49 point-paying wins. Stewart is in the NASCAR Hall of Fame thanks to those accolades, along with his co-ownership of Stewart-Haas Racing (SHR), the championship-winning NASCAR team Stewart shares with Haas Automation founder Gene Haas.

At just 22 years old, Herbst now races for SHR, driving the No. 98 Ford Mustang in the NASCAR Xfinity Series. On May 8 at Darlington (S.C.) Raceway, Herbst and primary partner Henry Repeating Arms will honor Stewart with a throwback paint scheme on Saturday of the Official Throwback Weekend of NASCAR. The orange-and-white design of Stewart’s 1999 Cup Series rookie-of-the-year ride will adorn Herbst’ No. 98 Ford Mustang in the Steakhouse Elite 200.

“To be able to run a paint scheme that was once driven by my boss is pretty cool,” Herbst said. “I was born the year Tony ran this paint scheme and it’s one of those iconic designs that everyone remembers. Henry Repeating Arms has some orange in its logo and they went all in on the design and it really came out great. It looks like what Tony ran back in 1999. It’s incredible to bring it back for one weekend and I can’t thank Henry Repeating Arms enough for making it happen. It’s an honor to drive their racecar.”

The 2021 NASCAR season marks Henry Repeating Arms’ third year with SHR, and the American manufacturer of classic rifles and shotguns that is a world leader in the lever-action category is a loyal customer of Haas Automation. With an array of Haas CNC equipment, Henry Repeating Arms makes more than 300,000 rifles and shotguns annually from its headquarters in Rice Lake, Wisconsin, and at its second manufacturing facility in Bayonne, New Jersey.

"Throwback weekends are a special thing that race fans look forward to and I am thrilled that we were able to meld our own flavor with this iconic paint scheme so cohesively," said Anthony Imperato, President and Owner of Henry Repeating Arms. "Riley has officially joined the Henry family now with his new Big Boy All-Weather rifle, so he's going to have a whole lot of people cheering him on come Saturday. We can't wait to see that Henry orange hit the track."

The Xfinity Series race at Darlington begins at 1 p.m. EDT on Saturday, May 8 with live coverage on FS1 and SiriusXM NASCAR Radio.