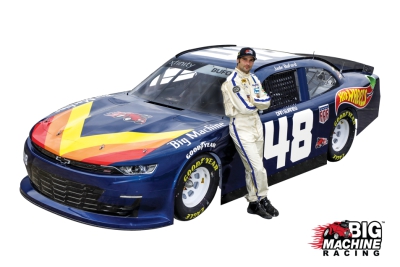 Big Machine Racing announced today, on what would have been Dan Gurney’s 90th birthday, that they will honor the late racing legend during the upcoming NASCAR Xfinity Series race at Darlington Raceway on Saturday, May 8. Gurney’s iconic All American Racers, Inc. (AAR) livery from the 1970 Trans Am Series season will be featured on Jade Buford’s No. 48 Big Machine Chevrolet during NASCAR’s official Throwback Weekend.

Gurney had quite the storied career, having won races in NASCAR, IndyCar, Formula 1, the Trans Am Series and more. In 1967 he was part of the first, and only, all-American duo to win the 24 Hours of Le Mans, accomplishing the feat with teammate A.J. Foyt. He was also a highly successful team owner and race car manufacturer. Paying homage to Gurney was a natural fit for Big Machine Racing team owner Scott Borchetta, who is also an avid racer and has a strong passion for motorsports and its history.

“Dan Gurney has always been one of my heroes. I had the great fortune to spend time with him in his later years and experience his charm, wit and genius,” said Borchetta. “It is our great pleasure to return Dan's iconic Trans Am livery to the racetrack with AAR & Hot Wheels, all with the blessing and support of Evi, Justin and the Gurney family. Win, lose or draw, we will be spraying champagne after the race in Dan’s honor!”

Gurney’s original bold blue livery featured oversized numbers that stood out on the track and was accented with brightly colored stripes on the hood as well as the Hot Wheels logo on the rear quarter panels. The paint scheme is from his final year prior to his retirement from getting behind the wheel of a race car and shifting his full-time focus to AAR team owner and race vehicle manufacturer.

“Dan would be very happy and honored to see a younger version of himself drive a younger version of the old No. 48,” said the late Gurney’s wife, Evi Gurney. “The car in its colorful livery with its provocatively outsized number looks bold and modern just like it did fifty years ago on the 1970 Trans Am circuit. It was cool then and it is cool again now. Congratulations on this marvelous ‘vintage’ racing effort and best of luck to Jade and the team.”

While Buford and the No. 48 team have never made a start at Darlington Raceway, they have already turned heads with impressive performances in their first-ever NASCAR Xfinity Series season. The 33-year-old road-course ace has put together three top-20 finishes in his last five starts, most recently driving to a 19th-place finish at Martinsville Speedway last weekend. When they head to Darlington next month, they’ll be looking for a strong finish as they honor Gurney and his legacy.

“The Gurney family wishes Jade and the Big Machine Racing Team huge success in the Xfinity race at Darlington,” said Justin Gurney, the late Gurney’s son and current president and CEO of AAR. “The No. 48 was always good luck for Dad and for AAR and with Dad looking down we think Jade might have some extra pressure pushing down on his right foot. The livery was always a favorite of Dad’s and fans all over the world. Thank you all for remembering Dad and AAR and honoring him in this way.”

Fans can tune in to the Darlington NXS Throwback race, the Steakhouse Elite 200, on Saturday, May 8 at 1 p.m. ET on Fox Sports 1.

“I am honored and thrilled to have the opportunity to drive a car that pays homage to Dan Gurney's 1970 No. 48 Hot Wheels AAR Cuda,” said Buford. “For me, cars have been a life-long obsession that started out by playing with Hot Wheels outside in the dirt and has evolved to where I am today - on the track with real motors. Next month, I get to be on the track with a real life-sized Hot Wheel, my childhood dream come full circle.”