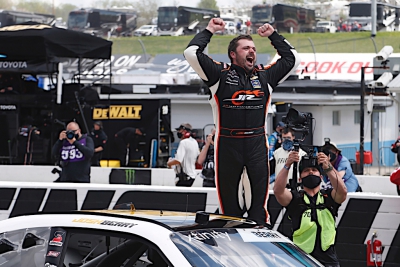 “This is for all those short track guys,” Berry told FS1 post-race. “There’s a ton of them out there that are like me that have won here and at all these great short tracks around here. We can do it. We just need the opportunities. Today proved it. Yeah it’s a short track but it’s still damn hard to win here and we did it.”

Berry has been with JR Motorsports competing in their late model program since 2010 and is currently running a 12-race schedule in the Xfinity Series for JR Motorsports. With his win on Sunday, Berry becomes the first driver to earn their first Xfinity Series win at Martinsville since Jeff Burton did so in September 1990. Rounding out the top five were Noah Gragson in second, Daniel Hemric in third, Ty Gibbs in fourth and Brandon Jones in fifth.

The 250-lap race was scheduled to be run on Friday night, but rain halted the race after 91 laps and the resumption of the race began after 12 p.m. Eastern on Sunday. Nosh Gragson, who finished second scored the first $100,000 Xfinity Dash 4 Cash bonus of the season.

Ty Gibbs, who finished fourth has finished in the top five in his first three Xfinity Series starts. Rounding out the top ten were Austin Cindric in sixth, Harrison Burton in seventh, Justin Haley in eighth, Justin Allgaier in ninth and Michael Annett in tenth.

The NASCAR Xfinity Series returns to action on Saturday, April 24th at Talladega Superspeedway at 4 p.m. Eastern on FOX. Berry, Gragson, Hemric and Jones are all eligible for the Dash 4 Cash in that event.