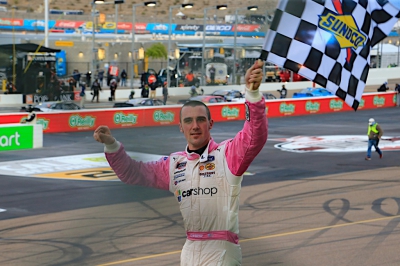 Cindric, the reigning series champion became the first driver to win more than one race this season.

Saturday’s win at Phoenix marks Cindric’s second win in a row at the track. His last win came in November of 2020 when he won to claim his first Xfinity championship.

Driver No. 22 held the lead on a restart with two laps to go after the 12th caution. Justin Allgaier got to the outside of Cindric but Allgaier would hit the wall, finishing eighth.

Rounding out the top ten were Ty Gibbs in second, Brandon Brown in third, Riley Herbst in fourth and AJ Allmendinger in fifth.

Rounding out the top ten were Jeb Burton in sixth, Bayley Currey in seventh, Justin Allgaier in eighth, Brett Moffitt in ninth and Jeremy Clements in tenth.

Noah Gragson’s bad season continues after he finished 39th with an engine issue. This marks the fourth time out of the last five races that Gragson has finished 28th or worse.

Austin Cindric continues his points lead. He has a 248 points. Daniel Hemric is in second with 201 points, Jeb Burton in third with 172 points, AJ Allmendinger is fourth with 162 points and Harrison Burton is fifth with 162 points.

The NASCAR Xfinity series will head to Atlanta Motor Speedway next Saturday at 5 p.m. Eastern on FS1.