Big Rig History! For the First Time Ever, John Ray’s Iconic Truck Will be on Display in the Midway at Talladega Superspeedway 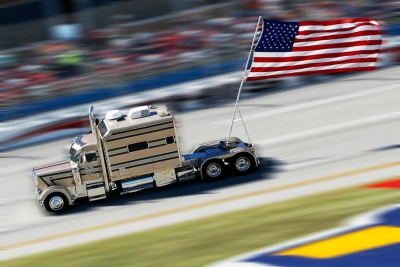 For 21 years, race fans have seen the iconic gold, brown and chrome Big Rig that carries the giant American flag around Talladega Superspeedway during the playing of the National Anthem prior to the start of races. During this weekend’s NASCAR Playoffs Tripleheader weekend, fans will have the unique opportunity to get up close and personal with the truck as it will be displayed in the Midway.

The Midway, located on the outside of the track’s frontstretch, gives fans PLENTY to do, and will be a bevy of fun with exciting interactive activities for families, beginning at noon CDT on Friday. Saturday the fun begins at 8:00 a.m. CDT prior to an incredible doubleheader - the Chevy Silverado 250 for the NASCAR Camping World Truck Series and the Sparks 300 for the NASCAR Xfinity Series. The Midway will also open at 8 am Sunday, with the YellaWood 500 NASCAR Cup Series race waving the green flag later in the day at 1:00 p.m. CDT. Fans can keep up with the “world-class” experience via the NASCAR App.

The tradition of the Big Rig began in 2001. John Ray, an Eastaboga native, whose trucking company is located just a few miles from the mammoth 2.66-mile venue, drove his truck, sporting the giant American flag on the track as a tribute to the country after 9/11, and to his good friend, the late Dale Earnhardt. Since, the Big Rig has become a patriotic symbol of the greatest race track on the planet. Ray passed away in 2020, but his son, Johnny, continues the traditional drive, and will so again this weekend during pre-race festivities.

The Midway will be a packed house, with 45 exhibits and activations to get long-time fans, as well as newcomers to the sport of NASCAR, amped up while enjoying multiple performance acts amidst the multitude of fan experiences. In addition, there will be Fan Q&A with NASCAR personalities inside the Talladega Garage Experience. The lineups of activities can be found at www.talladegasuperspeedway.com. For race fans looking for food and drinks, there will be a Papa Murphy’s station, Saloon Bar, among other options.

Here’s the Cliffs notes of that tremendous list (which includes the Midway and the Frontstretch grandstand):

Race fans in the popular infield Talladega Garage Experience, where fans can get up close and personal to the cars in the team garage bays, will also see driver Q&As at the Fr8 Auctions Stage. Those on hand Sunday, beginning at 9:30 a.m., are NASCAR Cup drivers’ Chase Briscoe, Tyler Reddick, Noah Gragson, Brad Keselowski and Martin Truex, Jr. Saturday’s entertainment will be an acoustic performance by Berritt Haynes at 9:45 a.m.

Great tickets remain for the anticipated event and fans are urged to call 1-877-Go2-DEGA or visit www.talladegasuperspeedway.com for opportunities.

While the YellaWood 500 NASCAR Cup Series race culminates an action-packed NASCAR Playoffs Tripleheader Weekend, things kick off Friday afternoon (at 2:30 p.m. CDT) with qualifying that will determine the starting lineup for both the Sparks 300 NASCAR Xfinity Series race and Chevy Silverado 250 for the NASCAR Camping World Truck Series. Saturday’s festivities get under way 11:30 a.m. CDT with the drop of the green flag for the Chevy Silverado 250, followed by the Sparks 300 at 3 p.m. CDT.

Multi-Platinum singer-songwriter Chase Rice, who also has NASCAR ties, will be the featured artist for the track’s traditional Saturday Night Infield Concert (Oct. 1). The best part about the concert is that admission is FREE with the purchase of a Sunday race ticket for the YellaWood 500. Breakout country artist Bailey Zimmerman will open the anticipated night.

Fans are encouraged to keep up with all the happenings at the biggest, baddest race track on the planet by following Talladega Superspeedway on Twitter, Facebook and Instagram, as well as the all-new NASCAR Tracks App. for the latest speedway news.