Betway, a global betting and gaming brand, has signed on as the entitlement sponsor for the Betway NHRA Carolina Nationals. 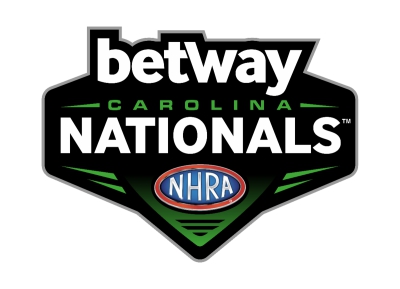 As the NHRA’s best drivers prepare for a pivotal Countdown to the Championship showdown at zMAX Dragway on Sept. 23-25, officials have announced that the event will have a new name. Betway, a global betting and gaming brand, has signed on as the entitlement sponsor for the Betway NHRA Carolina Nationals.
The second race in the NHRA Camping World Drag Racing Series’ six-event Countdown to the Championship brings cooler fall temperatures to the lightning-fast drag strip – providing the potential for track-record speeds when nitro-powered Top Fuel and Funny Car machines scorch zMAX Dragway’s pavement in search of a coveted Countdown triumph.
“When you can parlay the visceral on-track NHRA experience and unparalleled access to the drivers, cars and teams, the payout is a great weekend for the fans,” said Charlotte Motor Speedway executive vice president and general manager Greg Walter. “Bringing on board a global partner like Betway, which shares our focus on putting fans first and providing a best-in-class experience, everyone wins big.”
With the entitlement partnership, the first for Betway in motorsports, the company adds the NHRA to a growing list of more than 60 brand partnerships across the globe, ranging from the NBA, NHL and English Premier League to horse racing, cricket and esports, among other properties. In addition to naming rights, Betway will receive an extensive signage package, with visibility both at zMAX Dragway and Charlotte Motor Speedway during its upcoming NASCAR events to help raise awareness of the company, which was founded in 2006.
“The Betway NHRA Carolina Nationals are a huge fixture in the local calendar so it’s exciting for us to partner with Charlotte Motor Speedway, for what will no doubt be another weekend of fun and entertainment at the Concord racetrack,” said Anthony Werkman, CEO of Betway.
The Betway NHRA Carolina Nationals roars to life with back-to-back days of qualifying Friday and Saturday, Sept. 23-24, followed by an action-packed elimination day on Sunday, Sept. 25 that could set drivers up for a final run to the championship. Every ticket is a pit pass, giving fans unmatched access to the drivers and crews who tame the 11,000-horsepower machines and push them to their limits.
TICKETS:
Tickets, camping and upgrades to the Betway NHRA Carolina Nationals can be purchased online at www.zmaxdragway.com, by calling 800-455-FANS (3267) or at the gate. For more information about NHRA, please visit www.nhra.com.
(Courtesy of NHRA Communications)
Rate this item
(0 votes)
Tweet
« Legends Tour Series Returns to All American Speedway Oct 1 Stampede of Speed returns »