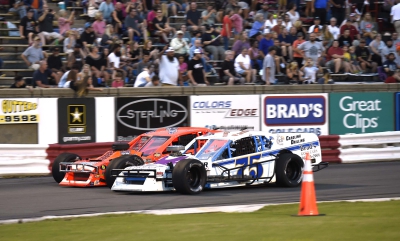 Bowman Gray Racing played the game of dodge the raindrops all night, but it still managed to get the whole schedule in.

Lee Jeffreys won his first Brad's Golf Cars Modified Series race in three years in the first 25-lap race, and in the second Modified race, Mike Speeney was originally credited with winning his first Modified race at Bowman Gray. However, after the racing schedule was completed Saturday night, Speeney failed post-race inspection – moving him to the rear of the field and  giving the win to Brian Loftin.

And Amber Lynn claimed the victory in Saturday’s Colors Edge 100, setting the record for the most wins by a woman in Bowman Gray history. Lynn has 12 combined victories in the McDowell Heating & Air Sportsman Series and the Law Offices of John Barrow Street Stock Series, surpassing the record previously set by Susan Kimel with 11.

As for the Modified Series, Jeffreys, who has been a staple at Bowman Gray for decades, took the pole for the first 25-lap race and led wire-to-wire, defeating 11-time and defending champion Tim Brown.

"It feels good," Jeffreys said. "I mean, we've had good speed for the last two months. Yoi know, we just got in some wrecks and just other stuff. The last couple years, we really haven't had much bad luck. So, you have to take the good with the bad. We all got down, but we just kept digging."

It was the third time this season that Jeffreys has sat on the pole.

"We just knew that if we could get qualified up front and get started up there, we'd be OK," he said. "You know, 25 laps over here, it doesn't sound like a lot, but you've still got to get out front.

"To outrun the 83 car (Brown) - the 16's (Chris Fleming) been good all year. Burt (Myers) is coming on with his new car. I mean Jason (Myers)," Jeffreys said. "But all those guys behind you - they're good. So, you have to be on top of your game to get there. So, we're just thankful that we won tonight, and hopefully the next three weeks we can be good as well."

"The car is good," Jeffreys said. "It took us a while to get it there. You know, the challenges we've faced with the practices here. We've worked hard and we've got it to where we could get the pole and get speed in the car. So, that's all you can ask for.

"It's easier when you've got speed to try and run good than it is to find speed and get through the bad luck."

After Jeffreys won, he drew 14 in the "Madhouse Scramble," which inverted the field in the second race at 14. Speeney, a native of Newton, Pa., was sent to the pole with Brian Loftin starting on the outside front row.

Speeney and Loftin tangled throughout the race, with grazing the guard rail but then getting enough speed to ram the rear bumper of Speeney. But Speeney was able to hold on to the lead. Speeney crossed the finish line first and was originally awarded the checkered flag. But after Speeney failed post race technical inspection, Loftin was awarded the win after originally finishing runner-up to Speeney.

Daniel Beeson ended up second after the disqualification, followed by Jeremy Gerstner and points-leader Brandon Ward.

As for Lynn, she dominated much of the 100-lap race for the McDowell Heating & Air Sportsman Series and picked up her record-setting win.

"I have chills just thinking about it," said Lynn. "All I want to do is win races. I don't think about the stats or anything like that. But beating it, I can't believe it. But it's not something I came here for. I came here to race. I came here to race good and clean, and that's exactly what we did.”

Lynn was the fastest qualifier for the 100-lap race. When the top six qualifiers redrew for starting position, Tommy Neal was slated to start on the pole, alongside Chase Robertson. Lynn was on the inside of row 2, next to Wesley Thompson.

Tommy Neal led for the first 53 laps, although he had several outside row challenges. Amber Lynn attempted to overtake him from the outside but couldn’t make the pass stick. Then with a nudge to the bumper of Neal, Lynn was able to get a nose to the inside and grab the lead.

On the seventh and eighth cautions, Adams was neck-and-neck with Lynn on the restarts, but Lynn was able to get an edge after a lap or two.

"Justin Taylor held off the 19 (Adams). Justin Taylor did so much for me tonight," Lynn said. "I tried to hold off the 21 (Tommy Neal) a couple weeks ago and got booted."

On the final caution, Lynn battled with Riley Neal but emerged victorious. She then led the final six laps for the win.

Taylor was third and Spencer Martin was fourth.

In the Law Offices of John Barrow Street Stock Series, Nate Gregg came from behind to win the 20-lap race.

Gerald Robinson Jr. was on the pole, but Billy Gregg went under Robinson, sending Robinson spinning. On the restart, Bryant Robertson took the lead, followed by Billy Gregg, Christian Joyce, and Brian Wall.

On lap 18, Robertson was still in the lead, but Nate Gregg moved into second, followed by Billy Gregg, who passed Joyce. On turn 4 of the final lapp, Nate Gregg gave a shot to the bumper of Robertson

Robertson lost control, while Nate Gregg took the lead and then the checkered flag.

In the Q104.1 Stadium Stock Series, Blaine Curry claimed the victory after time limit expiration ended the race on lap 12.

It was Curry's second win of the season.

Curry took the lead from Austin Cates on the first lap and carried that lead until the end, despite several cautions. Matt Alley finished second, Isaac Harris was third, and Justin Owens was fourth.

Racing returns next Saturday with the featured race being in the Brad's Golf Cars Modified Series -- the Great Clips 100. The Great Clips 100 is the final 100-lap race of the season in the Modified Series. It's also the final Fans' Challenge race of the season, meaning that the top four qualifiers for the 100-lap race have the choice of going to the back of the field for a chance at big bonus money if they end up finishing in the top four.