Walbridge Charges Back Into Championship Lead With $5,000 Madera Speedfest Win 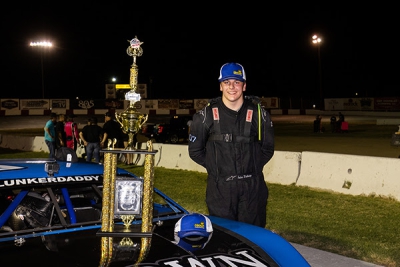 Vancouver, Washington’s Jadan Walbridge charged into the lead on lap 51 and never relinquished it, taking Saturday’s $5,000-to-win Summer SpeedFest 100 at Madera Speedway. The victory earned him the Lunkerdaddy Pro Late Model points lead with three rounds remaining in the series.

Napa’s Dylan Zampa returned to the speedway and drew the pole position. He led the feature ahead of the 21-car field. Walbridge started on the outside pole after fast-time in qualifying, but drifted backwards in the early laps.

The caution flew on lap four and it began a series of restart battles between Zampa and Livingston’s Carlos Vieira. Zampa used the inside line to narrowly lead lap five. The caution flew on lap six when Colorado’s Brody Moore slammed the front stretch wall. The ensuing melee gathered up Pete Soto and Cody Kiemele of Riverside as well.

Vieira restarted outside Zampa and took the lead on lap 11 by just .005 seconds. Zampa edged forward to take it back on lap 12. Zampa completed the pass while Walbridge and incoming points leader Kyle Keller of Las Vegas battled for third behind them. Soto spun in turn two for the next caution on lap 25.

Zampa and Vieira ran side-by-side yet again before Olivia Manke spun in turn four on lap 29. Eagle, Idaho’s Jacob Smith spun on the backstretch but continued and the race stayed green on lap 35. Walbridge finally topped Keller for third on lap 36 then turned his attention to Vieira. Walbridge nabbed second from Vieira in a drag race at the line for the lap 50 break for adjustments and MAVTV interviews.

Vieira came in third at the break with issues on the right front tire. He opted to restart third and not change the tire. Walbridge charged around the outside of Zampa for the lead on lap 51 while Vieira went up in sparks behind them. Jason Aguirre of Atwater collided with Vieira into turn three in a grinding crash that required a red flag on lap 52.

Tyler Herzog attempted to take second on the outside on the restart to no avail while Walbridge paced Zampa. Sean Hingorani of Newport Beach then challenged Herzog for fourth on lap 62. Washington’s Kasey Kleyn spun in turn one which collected Smith for a caution on lap 82. The spin evaporated Walbridge’s nearly one second lead over Zampa. The restart was called back twice when Zampa gained an early advantage. The third attempt stayed green with Walbridge driving ahead. The caution flew again on lap 84 and Nascimento emerged in third on the restart. Walbridge led Zampa over the final 16 laps while Nascimento won a hard-fought duel with his teammate Hingorani for third. Keller finished fifth and fell to second in the championship.

Kasey Kleyn of Washington led the opening lap of competition. Racing was halted immediately when Hailey Liles of Dinuba spun in turn four, sparking a major crash. Joaquin Stewart hit Liles then was hit from behind by Martinez’ Vito Cancilla. Stewart was unable to rejoin the action.

A serious crash in turn one brought out a red flag on the restart attempt. Fort Bragg’s Lane Anderson bounced off Sean Hingorani and into the turn one gate, causing significant damage to Anderson’s machine.

Nascimento seized the lead on the restart from Kleyn to lead lap four. Nascimento led Kleyn and Loomis’s Kenna Mitchell into the lap 40 race break. Hingorani moved forward after the break, restarting eighth but driving up to fourth by lap 60. Nascimento grabbed the win over Kleyn, Mitchell, Hingorani, and points leader Robbie Kennealy.

Huntington Beach’s Jake Bollman won the 40-lap, $1000-to-win INEX Legends Tour Series race. Points leader Brendan Ruzbarsky enjoyed the top spot and led the field into lapped traffic on lap seven. Bollman looked inside of Ruzbarsky for the lead on lap 14 but Ruzbarsky held the position. Bollman eventually took the lead with some contact on lap 18. Cody Winchel drove past Ruzbarsky into second as well.

Bollman and Winchel engaged in a physical battle with Winchel gaining the lead on lap 21. Three-wide action saw Bollman take it back on lap 22. Ethan Nascimento crashed off the side of Winchel to bring out a late caution on lap 34. Winchel wrestled the lead back with contact on lap 36. Bollman answered back, however, taking the lead on the final lap with a muscle move of his own. Nathan Quella finished third followed by Bakersfield’s Josh Ayers, and Josh Fleming. Jim Clark won the $500, 15-lap B Main as well.

Las Vegas’ Kellen Keller earned sole possession of the INEX Bandolero points lead after winning his third feature of the season. Ryan Schank finished second in his Madera debut ahead of Andrew Williams and Skyler Schoppe.

For more information about the Madera Speedway including how to advertise with a race team on MAVTV please visit www.racemadera.com or call the race office at 209-356-1968.
The 2022 season would not be possible without the support of Lunkerdaddy Fishing Lures, 51FIFTY LTM, Mission Foods, 805 Beer, Race 2B Drug Free, Competition Carburetion, Hoosier Tires, and Sunoco Race Fuel.