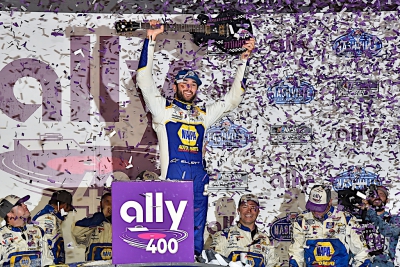 Through a hot afternoon and a cool night, sunshine and starry skies, as well as intense action and long idle periods, one element remained constant on Sunday at Nashville Superspeedway: Chase Elliott is NASCAR's concrete-track master in 2022.

NASCAR's most popular driver survived a late restart to win the Ally 400 NASCAR Cup Series race, bringing a close to a thrilling weekend at Middle Tennessee's home for racing and entertainment.

Elliott, driving the No. 9 Chevrolet for Hendrick Motorsports, led 42 of the race's 300 laps, stayed on the track with nine other drivers during the final caution period with less than 10 laps left, and remained on top during the final four green-flag laps.

"So proud of our team," Elliott said. "It was a long, fun day. It's nice to get going in the right direction. I'm looking forward to that guitar [trophy]."

It is Elliott's second victory of the season, with the first coming at Dover Motor Speedway, another concrete track, in May.

Busch, Blaney and Larson were three of the nine drivers aside from Elliott to stay on the track after a late caution flag on Lap 293 led to a decision for every team on whether to maintain track position or come in for fresh tires and adjustments.

"We were going to stay out no matter what, and I needed to start throwing fenders to move people around," Busch said. "I didn’t get after it, and I made too many mistakes."

Elliott's crew chief, Alan Gustafson, credited the buffer those nine cars built between his driver and those with new tires as a key for Elliott's win.

Elliott was eighth after the first stage and fourth after the second but didn't come close to the lead until the latter laps of the final segment.

Martin Truex Jr. nabbed the two early stage wins and his five stage victories top the Cup Series but he was one of several drivers to visit pit road in the final caution period and ended up 22nd after leading 82 laps.

Kyle Busch, who was running second to Elliott when the final caution waved also came in but finished 21st after leading 54 laps.

Both early segments included lengthy red-flag conditions for lightning (Stage 1 and 2) and heavy rain (Stage 2) which totaled more than three hours of delays. The first red flag came after 41 laps were registered and the second came after 139 circuits were in the books.

Denny Hamlin, the pole winner, was second in both stages, led a race-high 114 laps and finished sixth.

"We didn't want to see that late caution come out," Elliott said. "We were able to hold them off. This is big to win here at Nashville. It's pretty special. I always try to enjoy these moments because you never know when you're going to get another one."

In other notable finishes, Cup Series rookie Austin Cindric was seventh, Joey Logano led four laps and finished ninth and Cole Custer was the final driver on the lead lap in 26th.

Elliott, who leads the series standings by 30 points over Chastain, averaged 111.22 mph in completing the 400-mile event in 3 hours, 35 minutes and 15 seconds (not counting red-flag time). Seven leaders exchanged the lead 18 times and 10 caution periods took up 57 laps.