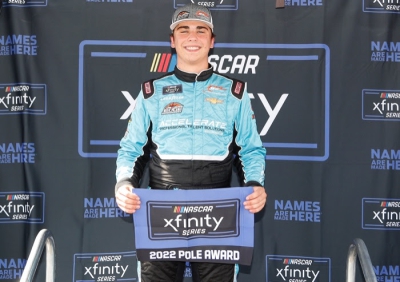 Sam Mayer knows his way around Charlotte Motor Speedway like few drivers in his class.

The 18-year-old driver of the No. 1 JR Motorsports Chevrolet led a 1-2 sweep for JRM, with teammate Justin Allgaier joining Mayer on the front row for Saturday's race, which goes green at 1 p.m. ET.

Ryan Preece's No. 5 B.J. McLeod Motorsports Ford broke up the JR Motorsports party with a third-place effort, while Josh Berry's fourth-place run made it three JRM cars in the first two rows.

SAM MAYER, No. 1 JR Motorsports Chevrolet (Pole Winner): "It's a bit different scenery than I'm used to (at Charlotte), but we're obviously racing at the same race track. It's cool to have had that success (in a Legend Car) back then and now, coming back here with my first qualifying run in an Xfinity car, winning the pole just makes it even cooler. To get a pole at a really challenging track like Charlotte is really special.

Obviously, JRM is looking for their first Xfinity win here and hopefully, we'll make it happen."

JUSTIN ALLGAIER, No. 7 JR Motorsports Chevrolet (Outside Pole Winner): "Everybody at JR Motorsports has been doing a great job. With the resin being activated from practice, it’s going to be interesting at the start of the race. It’s going to be kind of a wild start. But, I’m really proud of our team again.

To have three of us in the top five and four in the top ten, that says a lot about our team and effort we put in the car. This weekend is such an important weekend, not even for us racing, but just Memorial Day and honoring our fallen men and women who supported this country. We are going to go out there and give it our best and try and improve by one more spot."