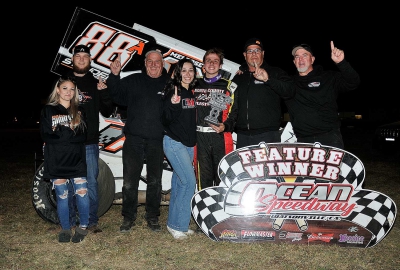 Following a pair of runner-up finishes in 2021 and a string of fast-times and dash wins, 17-year-old Joey Ancona of Concord finally tasted victory in the Ocean Sprints presented by Taco Bravo with his first win Friday night in Watsonville. Six different divisions were in action at Ocean Speedway, located at the Santa Cruz County Fairgrounds.

Ancona drove around the outside of dash winner Jake Haulot of Cotati to lead the second lap of the 30-lap feature. Dirt.Travel fast-time winner Justin Sanders advanced from his fourth starting position to challenge Ancona in lapped traffic. The winner of nearly 50 Ocean Sprints features pulled alongside Ancona in turns three and four on lap 10, but his move was blocked by a slower car on the inside. Ancona maintained an advantage over Sanders until a caution fell on lap 23. Justin Sanders’ younger brother Rickey and Haulot crashed for third in turn four.

Ancona restarted with Justin Sanders and over 20-time winner Bud Kaeding in his trail. He was undeterred as he pulled away on the green flag. Two-time 2022 winner Tanner Carrick of Lincoln slowed on the restart with a flat right rear tire.

The lead for Ancona stretched to a few car lengths over the final two laps with Ancona topping Sanders, Kaeding, eighth-starting JJ Ringo, and 11th starting Chase Johnson of Penngrove. 16-year-old Max Mittry of Redding won the B-Main then finished tenth in the feature.

2020 IMCA Sport Mod champion Adrianne Frost won a popular victory in Friday’s Sport Mod feature. Oakley’s Jacob Mallet, Jr. leapt ahead from the pole position. His lead was short lived, however, when he spun in turn two requiring a caution on lap four. Fourth-starting Jonathan Hagio of Prunedale inherited the top spot. The caution flew again on lap nine when Markus Frazier from Santa Maria stopped on the backstretch.

Frost used the restart to show her nose inside of Hagio. Frost moved to the inside in turn two on lap 13 to drive into the lead on lap 14, with a caution flying a lap later for Cody Bryan spinning out. Oakley’s Andrew Pearce drove from his ninth starting position up into second on the restart, then challenged Frost. Pearce went to the outside of Frost but came up short. Forst topped Pearce, Hagio, Mallet, and Tracy’s KC Keller for the win.

San Jose’s Shawn Jones drove from 13th to the winner’s circle in the 20-lap South Bay Dwarf Car feature. Sean Catucci of Brentwood led the first three laps before seven-time 2022 winner Danny Wagner of Baypoint grabbed the point on lap four. Eric Weisler of Campbell spun for a caution on lap five. Jones advanced through the field quickly and emerged in third on the restart. Terre Rothweiler charged to third from the shotgun position on the field as well.

The 15-lap Four Banger event opened with a duel between Scotts Valley’s Sean McClelland and Felton’s Nicole Beardsley. Beardsley knifed underneath McClelland to take the lead on lap nine, but the move was nullified when 14-year-old Amaya Flowers of Watsonville and Ryan Bowers of Brookdale collided in turn four to bring out the caution flag.

Beardsley made the maneuver on the restart to grab the lead on lap ten. Jason Lazzerini of Moss Landing entered the picture in the closing laps. Lazzerini moved inside Beardsley exiting turn four on the final lap. The leaders collided, sending Lazzerini sideways across the finish line for the win. Beardsley finished second ahead of McClelland, Kate Beardsley, and Travis VanGilder of Felton.

Chad Ragsdale of Merced topped Jerry Skelton of Watsonville in the Hobby Stock feature. Racing in memory of his wife Renee, Skelton led the first four laps side-by-side with Ragsdale. Ragsdale cleared Skelton for the top spot on lap five.

Joe Gallaher slowed on the front stretch with a flat right rear tire to bring out the yellow flag on lap nine. Ragsdale held off Skelton in a narrow battle to the finish. Wally Kennedy of Freedom, Brady Muller of Santa Cruz, and Gallaher rounded out the top-five.

Ocean Speedway will be dark on May 27 with racing returning on June 3. Action will include the Ocean Sprints presented by Taco Bravo, IMCA Modifieds, Hobby Stocks, Four Bangers, and South Bay Dwarf Cars.