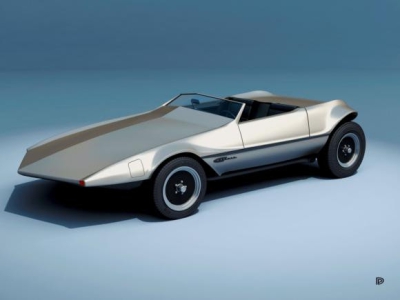 Fresh from a frame-off restoration, one of the earliest cars of the “wedge” design movement, the 1966 Cannara I, will make its Carolinas debut at Charlotte Motor Speedway’s April 7-10 Charlotte AutoFair.

Some of the world’s most exciting sports cars—the Lamborghini Countach, Lotus Esprit, and Fiat X1/9, to name but a few—owe their striking appearances to a styling philosophy born in the late 1960s that emphasizes triangular profiles. Nothing looks faster sitting still than a car whose body conforms to a strict wedge shape, beginning with a sharply pointed nose and ending with a tall, truncated rear.

The 1966 Cannara I roadster, provided by The Dirkin Collection of Clermont, Florida, isn’t the only vehicle of historic interest coming to the April 7-10 Charlotte AutoFair at Charlotte Motor Speedway. The Showcase Pavilion will also feature Rick Hendrick’s $5 million Ferrari LaFerrari, a Ford GT40 that starred in the Ford v Ferrari movie, the “Best of the Best” of the recent car show circuit, and a nostalgic display of AMC products.

The Charlotte AutoFair features more than 50 car club displays and more than 10,000 vendor spaces offering an array of automotive parts and memorabilia. More than 1,500 collectible vehicles of all makes and models will be available for sale in the car corral that rings the 1.5-mile superspeedway throughout the four-day show. Hours for the April 7-10 Charlotte AutoFair are 8 a.m. to 6 p.m., Thursday through Saturday and 8 a.m. to 4 p.m. on Sunday.

Adult single-day tickets are just $10 on Thursday and Sunday, $15 on Friday and Saturday. A four-day weekend pass is available for just $40. Admission is FREE for children 12 and under with an adult. AutoFair tickets are available online at www.charlottemotorspeedway.com, or at the gate.

Keep track of Charlotte AutoFair attractions and events by following on Twitter and Instagram or become a Facebook fan. Keep up with all the latest news and information with the Charlotte Motor Speedway mobile app.