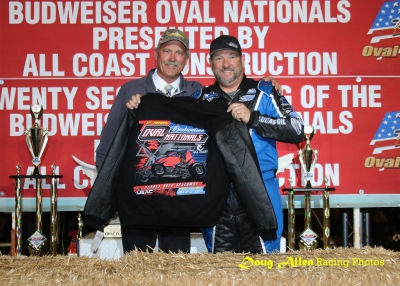 For the third time in seven seasons, Perris Auto Speedway promoter Don Kazarian was voted “Non-Wing Promoter of the Year” in the annual Sprint Car Hall of Fame media poll. Kazarian, who won the same award in 2014 and 2015, shared this year’s honor after finishing in a tie with Matt Wood, who promoted USAC races at Huset’s Speedway in South Dakota and Northern California’s Placerville Speedway in 2021.

This year’s award came after the track’s historic 25th anniversary season. After constructing the showcase racing facility in 1996, the Kazarian family is the only promoter the famous Riverside County half-mile clay oval has ever known.

“Thank you very much to the National Sprint Car Hall of Fame and to the media members who voted,” Kazarian said. “It is a big honor to win this award. However, it is not just about the promoter. It takes a team of hard workers, and we are extremely fortunate to have had the same core of employees at The PAS for a lot of years. It also takes a lot of help from sponsors and teams. Without them, we could not put on shows. We also have a wonderful group of fans. I should call the fans “family and friends.”  So many of them have been with us for an exceptionally long time. Everyone mentioned has played a significant role in the track winning this award and I want to thank all of them.”

The award comes after what was supposed to be the track’s 25th anniversary year of racing in 2020. However, that season was cut short after one race in March due to Covid. Things did not look much better at the start of the 2021 campaign as Covid intervened again and delayed the season opener by more than a month.

“Winning this award after what we went through in 2020 is extra special,” the past champion sprint car owner stated. “Not only us, but most tracks around the country had no idea how things would work out, how long everyone would be shut down, or if we would survive. Then we were shut down again for the start of the 2021 campaign. It was very scary, but once we got going, we had a great season.”

As always, Kazarian and the staff have stayed busy since the end of the 2021 campaign on November 20th. The track is poised and ready to open its 26th season of racing on March 5th when LKQ Pick Your Part will Present Night of Destruction. From that date through November 12th, there will be 27 nights of action. As usual sprint cars will lead the way with 10 dates starting with the annual “SoCal Showdown” featuring the World of Outlaws NOS Energy Drink and Amsoil USAC/CRA Sprint Cars. The PAS Senior and Young Gun Sprint Cars along with the Lucas Oil POWRi Southwest Lightning Sprints will also be in action at the PAS this year. The open-wheel season will conclude with three great nights of high-level competition in the 26th Annual Heimark/Anheuser Busch Budweiser Oval Nationals in November.

In addition to sprint cars, the PASSCAR Stock Car Series and Nights of Destruction will have full schedules in 2022. The entire schedule is printed below.

Two weeks ago, Kazarian was a guest on “The Racer Radio Show” and he discussed the 2022 schedule with host Dave Stall. For those who missed the show, you can listen to the replay at the following link http://www.perrisautospeedway.com/radio22/RACERRADIO220102.mp3

Advance tickets for all PAS-promoted races will be available soon at www.tix.com. Tickets for the World of Outlaws USAC/CRA So Cal Showdown are on sale now at the following link https://mpv.tickets.com/?orgid=52711&agency=WRG_SNG_MPV&eventID=73567

Rate this item
(0 votes)
Tweet
« Ice Cube to perform during race break at Busch Light Clash at the Coliseum INX Joins Daytona International Speedway for The Roar Before the Rolex 24 At DAYTONA This Weekend, Jan. 21-23 »