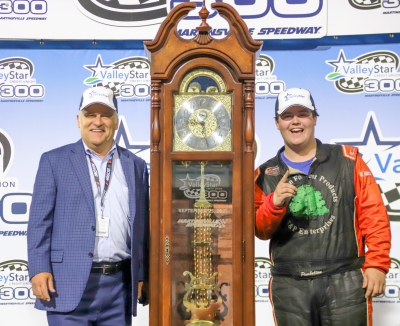 “It’s pretty unbelievable,” said Pembelton, who earned more than $32,000 for the victory as well as the coveted Martinsville grandfather clock. “I never thought I’d win a clock until I got a lot of experience under my belt. It’s pretty amazing.”

The move that likely won Pembelton the race came during the first scheduled break in the action at lap 75, when Pembelton’s crew bolted on his allotment of two new Hoosier tires. He made his way back up to third by the time of the second break at lap 150, but unlike most of the field, he decided to stay out and inherited the lead as a result.

“We were talking about it on the grid getting ready to go, strapping in, and my crew chief said let’s try something different,” Pembelton said. “It actually played out a lot better than I thought it would. I really didn’t know what I thought about it at that point, but it actually came out pretty good.”

Behind him, Mike Looney followed the same strategy and stayed out, meaning the rookie Pembelton would restart alongside the veteran Looney for the final dash to the checkered flag.

Pembelton got a great restart and held off Looney, but an immediate caution flag for a spin by Stacy Puryear set up another restart with Pembelton and Looney on the front row. This time around Pembelton got another great restart while Looney spun his tires, allowing Jacob Borst to sneak into second.

The top-three stayed that way until another caution on lap 171 when Corey Heim came to a stop on the track. Utilizing the choose rule, Borst opted to restart behind Pembelton on the bottom while Looney took the top to restart on the front row.

This time around it was Looney who got the better restart, with the 2016 ValleyStar Credit Union 300 winner leading by a fender at the start-finish line the next time around.

Pembelton hung to Looney’s inside and in turns one and two gave Looney a shove up the track, forcing Looney out of the way and allowing Pembelton to clear him to regain the race lead.

Looney fell to third behind Borst after the shove by Pembelton and Looney spent several laps trying to get back around him. The two made contact at one point down the frontstretch that nearly sent both cars sideways, but they both recovered, and Looney eventually got the position back.

By then it was too little, too late for Looney as Pembelton had stretched his lead to more than 2.5 seconds. He crossed the finish line well ahead of Looney to become the 26th different winner in the history of the event.

“We wanted to run this race, we wanted to just try and make it,” Pembelton said. “It’s pretty unbelievable. It was kinda cool out front.”

Now all that remains for Pembelton is to decide where his new Martinsville grandfather clock will live.

“I want to put it in my room, but I don’t have any room,” Pembelton said with a smile. “We can make it work.”

Despite finishing second, Looney was one of the first people to congratulate Pembelton in victory lane after the race. If anyone was going to beat Looney, he said he was thrilled that it was Pembelton.

“The Pembelton family have been racing for a long, long time. They’re good people,” Looney said. “Once he got that gap on me we were too equally matched. I couldn’t run him down. On one hand I would have liked to have a green-white-checkered, but I’m pretty pleased to bring Billy Martin’s car back home in one piece.”

Layne Riggs, who was the leader at the end of the second scheduled break at lap 150, finished third. Recently crowned ARCA Menards Series East champion Sammy Smith was fourth, with Jared Fryar completing the top-five finishers.

Bobby McCarty, who started second and was the race leader at the time of the first 75-lap break, finished sixth and was crowned the 2021 Virginia Triple Crown champion. He earned $7,000 for capturing the three-race championship that also included the Hampton Heat 200 at Langley Speedway and the Thunder Road Harley-Davidson 200 at South Boston Speedway.

The ValleyStar Credit Union 300 will return in 2022 at a date to be announced in the future.