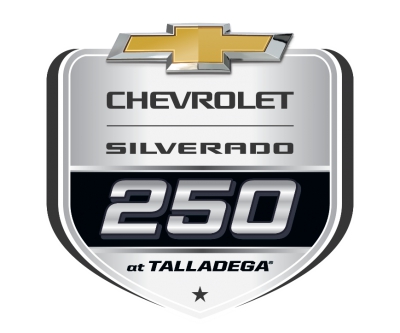 Officials from Talladega Superspeedway and Chevrolet announced today that the American automobile manufacturer will again be the entitlement sponsor of the Oct. 2 NASCAR Camping World Truck Series Playoffs race. As it was known last year, the Chevy Silverado 250 at TALLADEGA will again serve as a vital race in the Camping World Truck Series Playoffs.

The official NASCAR Chevy Silverado pace truck will lead the field to green at Noon CDT in the 16th Chevy Silverado 250 at TALLADEGA. The race will be a part of a Saturday doubleheader which will see the Sparks 300 NASCAR Xfinity Series Playoffs event later in the day at 3 p.m. CT. The weekend culminates with the Sunday, Oct. 3 NASCAR Cup Series Playoffs race – the YellaWood 500.

Last week, Chevrolet announced major enhancements for the 2022 Silverado that features an elevated exterior design and a new, expressive interior with enhanced technology. Chevy’s best-selling truck offers customers more choices including the first-ever Silverado ZR2, a new flagship off-road truck and the latest addition to a successful lineup of off-road, factory lifted trucks. Prior to the race, 70 of Chevy’s Truck Legends, who are current owners or have purchased or leased more than one Chevy truck, will get to check out and learn more about the Silverado ZR2.

Three out of the last five winners of the Chevy Silverado 250 at TALLADEGA at the 2.66-mile venue have been won by Chevrolets – Mobile, AL native Grant Enfinger (2016), Timothy Peters (2018) and Spencer Boyd (2019). In the NASCAR Cup Series, Chevrolet is Talladega Superspeedway’s leader in total wins with 41.

“We are thrilled that the Chevy Silverado 250 will be making its return to Talladega Superspeedway,” said track President Brian Crichton. “Just like Talladega Superspeedway, NASCAR’s biggest and most competitive venue, Chevrolet and its Silverado Trucks are tough and bold. The Silverado has been a mainstay in our sport for many years, and we are happy to welcome back our friends from Chevrolet. It‘s going to be one heck of a race like it always is here at Talladega.”

Chevrolet is also the winningest manufacturer in the NASCAR Cup Series, and in 2021, at the Circuit of The Americas, Chevrolet achieved 800 wins in the NASCAR Cup Series. Chevrolet has designed cars for every generation of stock car racing since the first-generation way back in the ‘40s and ‘50s. They are ready to continue this pattern with the 7th generation Next Gen cars which are scheduled to make their debut at the beginning of the 2022 season.

The Chevy Silverado 250 at TALLADEGA is the second race in the Playoffs Round of 8 (3 total races in round), Raphael Lessard won his first career Camping World Truck Series race last year at Talladega by leading in the final lap. He became the first French Canadian to win in a NASCAR National Series. Chevrolet driver Sheldon Creed was victorious in the first race of the 2021 NASCAR Camping World Truck Series Playoffs at Gateway (IL).

Tickets for the Chevy Silverado 250 at TALLADEGA start at $45 for adults and kids 12 years and younger get in FREE. These tickets include access to the Talladega NASCAR Xfinity Series race later that same day! To see the YellaWood 500 as well, fans can get Two-Day Tickets that start at $60 for adults and $10 for kids 12 and younger.

For more information, log onto www.talladegasuperspeedway.com. Fans are encouraged to keep up with all the happenings at the biggest, baddest race track on the planet by following Talladega Superspeedway on Twitter, Facebook and Instagram.