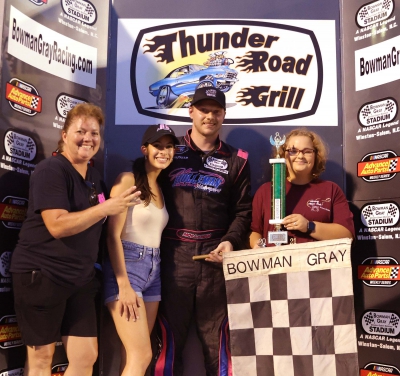 The drivers in the Q104.1 Stadium Stock Series only get one chance to be the featured race in any given season at Bowman Gray Stadium.

That night was Saturday, in the Thunder Road Grill 50, and it didn't disappoint.

Brandon Brendle and A.J. Sanders raced side-by-side on the final lap, and as both drivers wobbled at the finish, Brendle surged ahead for the win. It was
Brendle's second win of the season, and his third straight win in the 50-lap race.

Brendle needed that car and his steering wheel at the finish.

Chuck Wall sat on the pole for the race and led until lap 18 when Sanders bolted past him. Sanders held the lead until lap 45 when Brendle took the lead.

There was a restart following the caution. Brendle sat in first with Sanders just behind. Both Brendle and Sanders were side-by-side for much of the final lap
until Brendle edged him at the finish line.

"I didn't want to be too dirty," Sanders said. "But I had to remember what he did to me in the last 50-lapper. We got on the last lap, last corner. I was going
to rough him up on that last lap. That's all I could do and still be as clean as I could."

Sanders was able to take some solace in finishing runner-up.

"I knew going into it I had nothing to lose," he said. "So, I wanted to win it pretty bad."

Getting that caution inside five laps helped Brendle – it was a single-file restart so Sanders couldn't start on the outside front row.

"I knew we had a really fresh car," he said. "I think we had a good enough car to clear anybody on the outside. So, I felt like if anybody was in front of us,
we had to get up under them and drive."

It all came down to two experienced drivers.

"You've got to know who you're racing with, too," Sanders said. "Chuck Wall is probably one of my best friends as far as racing. I knew we might touch, and we
did. But I knew that doing that, he was going to run me about as hard and as clean as he could.

"It seemed like his car was having troubles, and it worked out. So, we had a good car. We finished second. We'll go on and hopefully get this 50th win."

Sanders was referring to the fact that he has a current tally of 49 wins in the Stadium Stock Series.

"People can make fun of Stadium Stocks all they want to," he said. "This is probably the toughest class at this race track to drive because we don't have the
tires. We don't have all this luxury. So, we have to man-handle these things. I've done this, next year will be 40 years, so I know what it takes to do it.”

Brendle also knows what it takes to win races and perform well within the Stadium Stock Series.

"I said it earlier, I take pride on Googling, studying, researching physics. And I love studying race cars and how they work," he said. "And my goal is work
off all four corners of this race car even and try to make me a long-run car. And it tends to show off."

"I've been coming over here since I was 6 years old, and it's just a passion like no other," he said. "My kids enjoy it. I was ready to hang it up a few years
back, and the older my kids got the more they said, 'Let's get back into it.'

John Holleman IV may be a rookie in the Brad's Golf Cars Modified Series, but he isn't showing it. Holleman won the first Modified race Saturday night, which
was his third win of the season.

Holleman won his first career Modified pole earlier in the night and used that strong start to propel himself throughout the race. There were three cautions on
laps 1, 13 and 22, but it didn't matter. Holleman fended off Brandon Ward, Burt Myers, Jason Myers, Lee Jeffreys and points leader Tim Brown.

Holleman felt better about things after finishing 10th and fourth respectively in the two 25-lap races on July 24.

"We had a winning car last week and got messed up in some things we shouldn't have," he said. "But you look better when you come out and win."

In the second 25-lap race in the Brad's Golf Cars Modified Series, Chris Fleming claimed his first win since June 15, 2019.

Fleming, who was placed on the pole by the “Madhouse Scramble,” took his 11th career victory.

"It's great to celebrate with my grandson," Fleming said. "It's been a hard little time."

In the first 20-lap race for the McDowell Heating & Air Sportsman Series, Amber Lynn picked up her first win of the season and her fourth overall since she
joined the Series.

Lynn started third behind Ronnie Bassett Jr., but Kyle Southern, who was in second, quickly took the lead. Lynn bided her time and slipped past Southern just
across the start line on lap 7.

Lynn took a commanding lead, but there was a caution after a pileup around turns 3 and 4 on lap 18. After the caution, Lynn surged past Sterling Plemmons for
the win.

"It's been a really long year," Lynn said. "We've had a lot of highs and a lot of lows, more lows than highs. But without my team, without my parents, without
all my sponsors, I couldn't do what I do tonight. So, excuse me while I ugly cry."

Tommy Neal was third and Wesley Thompson was fourth.

In the second 20-lap race in the McDowell Heating & Air Sportsman Series, Spencer Martin won for his third career win.

Martin led with five laps remaining, and had to withstand a caution on lap 18, but cruised to the win ahead of Kirk Sheets, Tommy Neal, and Southern.

What a night it was for the Gregg family in the 20-lap race in the Law Offices of John Barrow Street Stock Series,

Nate Gregg survived six cautions and defeated his father, Billy Gregg, for the win. It was also the night before Nate's 18th birthday.

Nate took the lead on lap 5 after he passed leader Taylor Robbins, and Nate never relinquished the lead. Nate even eased to the win past his father. While the
two Greggs were well out front at the finish, Bryan Sykes was third, and Jeremy Warren was fourth.