Dominic Scelzi Capitalizes to Go For Two at Ocean Speedway 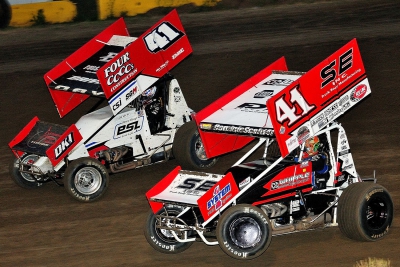 Taking advantage of the misfortune for points leader Justin Sanders, Fresno’s Dominic Scelzi won his second Ocean Sprints presented by Taco Bravo feature on Friday night. Scelzi earned fast-time then placed himself in position to capitalize when Sanders slowed suddenly from the lead in the 30-lap contest, surrendering the top position with an apparent rear-end issue. Scelzi’s win was part of a five-division affair at the Santa Cruz County Fairgrounds dirt track.

“Anytime you can come here and run the way we have, it’s a huge confidence boost,” Scelzi said. “I just didn’t do a very good job in lapped traffic. I definitely felt like we were as good as Justin (Sanders) was. We were starting to close in a little bit. When he broke off of four…I locked the brakes up and actually made contact with him on the right front. Luckily nothing broke and we were able to pick up our 16th win of the year for us.”

The opening laps had several cautions, first when Joel Myers, Jr. of Sebastopol and Goodyear, Ariz.’s Logan Calderwood collided in turn two, bringing Calderwood to a stop with damage. The field raced for one lap before Kurt Nelson stopped in turn three with a flat left rear tire. On the next attempt, pole sitter Keith Day, Jr. led the way but had company on the inside from Sanders on both ends of the race track. The caution flew again on lap two with Chris Nelson suffering a flat left rear.

Day drove slightly ahead of Sanders on the restart, giving Sanders the opening to knife to the inside in turn one to take the lead on lap three. Lapped traffic on lap 11 allowed Joey Ancona of Concord to take the outside of Scelzi to grab third in turn one. Day slowed from the second position on lap 19, giving up second to Ancona and third to Scelzi. Day eventually stopped on the backstretch for a caution on lap 22. He rejoined the field after a trip to the work area. The caution flag erased a five second advantage for Sanders.

Scelzi used the restart to earn second from Ancona, crossing him over into turn four. Scelzi then chipped away at Sanders’ lead, closing within a car length. As the field came to complete lap 27, Sanders slowed abruptly on the front stretch. Scelzi made slight contact but was able to steer clear of Sanders to assume the lead as the caution fell. Ancona suffered an issue on the following restart that relegated him to the infield as well.

Brentwood’s Blake Bower dominated the Western Midget Racing presented by Masters Design and Construction main event for his fifth win of the season.

Bower and Pombo/Sargent Classic winner Sage Bordenave of French Camp split the heat races on the night. The duo shared the pole for the 20-lap feature. Bower charged ahead early while Bordenave went backwards. Bordenave eventually slowed on the backstretch to require a caution. He was able to refire and rejoin the field at the rear.

D.J. Freitas of Herald went past Santa Paula’s Megan Moorhead into turn one on the restart to grab second position. Fresno’s Tyler Dolacki made a bid on the outside while driving Cameron Beard’s no. 24 TCR chassis. Dolacki passed points leader David Prickett of Fresno, Upperlake’s Brody Petrie, and Moorhead to advance to third.

Bower encountered lapped traffic by lap nine but never wavered, accumulating a 3.637 second advantage over Freitas at the finish. Dolacki finished third while Petrie won a battle with Prickett for fourth.

Brentwood’s Fred Ryland earned his sixth IMCA Sport Mod win of 2021 at Ocean in a 20-lap contest. Prescott Valley, Ariz.’s Timothy Allerdings led lap one from the outside pole, before Prunedale’s Max Baggett worked to the inside in turn two to lead lap two. The maneuver brought Ryland in tow, with Ryland going inside of Baggett on the backstretch to lead lap four.

Allerdings eventually fell outside the top-five as the leaders approached lapped traffic by lap eight. A pair of cautions fell on laps eight and nine for spins involving Justin Parr.

The exclamation point of the race came on lap 17 in a five-way battle for third. Oakley’s Tommy Clymens collided with Baggett in turn four. Baggett’s car shot down the track into oncoming traffic, hooking points leader Randy Miller of San Jose and 2020 champion Adriane Frost of Watsonville into the front stretch wall. Jim DiGiovanni of Morgan Hill t-boned Baggett with all four heading for the wall. All five drivers were uninjured but unable to continue.

One of the largest Four Banger fields in recent years had a familiar winner with 2018 and 2019 champion Kate Beardsley getting the win. Beardsley faced pressure from Santa Maria Raceway standout Levi Burgett for the duration of the 20-lap feature but she won the battle of the no. 43 cars for the win. Points leader Tony Gullo, Kenny Stragalinos of Boulder Creek, and Nicole Beardsley rounded out the top-five of the fast-paced feature which started 13 cars plus one Mini Truck.

Santa Cruz County Sheriff Nate Graham won his third Police-in-Pursuit main event of the season. The 2020 champion took the lead on lap one from the outside pole. Polesitter Roy Iler from San Benito Sheriff’s Office closed in on Graham in the final laps but couldn’t complete a pass for the lead. Most recent race winner A.J. Waltrip of Santa Cruz County Sheriffs started at the back and finished third.

The Ocean Sprints presented by Taco Bravo continue an exciting five races in four weeks stretch this Friday night. IMCA Modifieds, IMCA Sport Mods, Hobby Stocks, and Four Bangers will also be in action on Hall of Fame night. Tickets available online at www.OceanSpeedway.com or at the gate.