Summer Speed Fest for $5,000 to Win This Saturday Night at Madera Speedway 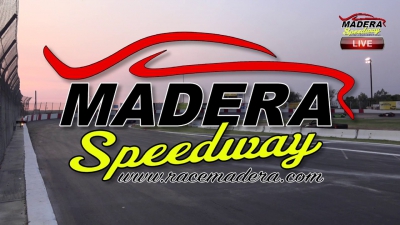 Stock car racing’s mid-summer classic continues this Saturday night with the $5,000-to-win Summer Speed Fest for the Nut Up Pro Late Models. The 100-lap race serves as round six of the MAVTV-televised championship and will be joined by a 70-lap 51FIFTY Jr. Late Model race, the Mini Cups vs. Bandoleros, and the Legends of the Pacific.

Ticket information can be found at: http://racemadera.com/ticket-info.html with online sales available through MyRacePass. Tickets can also be purchased at the gate. Race fans can also view the live streaming coverage on Short Track TV on YouTube beginning at 6:00pm Pacific.

2019 champion Austin Herzog of Clovis leads his cousin Tyler Herzog in the 2021 Nut Up Pro Late Model championship by 23 points. Madera’s winningest Late Model driver Matt Erickson has accumulated three podium finishes including a victory on Military Tribute Night to advance to third in the standings. Erickson was also the highest Late Model finisher in the latest action in the Madera club Late Model division. Erickson has only earned one qualifying point this season and seven Mission Racing Style Tortilla Chips halfway break points. Austin Herzog has earned a combined 28 qualifying and halfway points, with that 20-point difference comprising most of the 30-point gap between them.

Vancouver, Wash.’s Jadan Walbridge led qualifying during the Ron Spencer Red, White, and Blue Classic and added 32 laps led at the front of the pack as well. Walbridge is fourth in the standings and is looking for the biggest win of his young career on Saturday night. Jason Aguirre is also aiming for his first MAVTV victory this weekend from fifth in the championship. Las Vegas’ Kyle Keller qualified second during the Ron Spencer race as well and is seventh in the standings. 2020 51FIFTY Jr. Late Model champion Bradley Erickson of Phoenix, Ariz., Bakersfield’s Kabe McClenny, and Mariposa’s Glen Cook round out the top-ten.

Saturday’s 100-lap affair will be split over a pair of 50-lap segments to decide the Summer Speed Fest winner.

The 51FIFTY Jr. Late Model Series championship has intensified with the emergence of Smartsville’s Brody Armtrout. Armtrout has won back-to-back races to place pressure on points leader Jacob Smith of Eagle, Idaho and second-place driver Barrett Polhemus of Texas. Smith leads Polhemus by 25-points, while Armtrout is just one point behind in third. Ethan Nascimento of Manteca rounds out a potent top-four at just 27 markers out of the lead.

Armtrout led the final 42-laps of round five on the way to his second victory of the year. Smith has two wins on the year as well and two fast-times. Polhemus has been the model of consistency with two second-place finishes and four top-fives. Colorado’s Brody Moore rounds out the top-five in the series.

Saturday’s 51FIFTY Jr. Late Model Series race is another 70-lap battle with a 40-lap opening segment and a 30-lap run to the finish.

Bakersfield’s Logan Chambers has won four of the five Bandolero races at Madera in 2021 while also barnstorming across the west to add additional Bando trophies. Chambers enjoys a 23-point cushion over Joey Kennealy of Madera in the championship with Bakersfield’s Caden Cordova in third. Kingsburg’s Sam Wedehase has a six-point lead in the Mini Cup portion of the combined division, trading wins back-and-forth with Las Vegas’ Kellen Keller. The youngest drivers at Madera Speedway will race a in a combined 20-lap event on Saturday.

The touring Legends of the Pacific return to Madera Speedway for a 35-lap feature that is a make up for a cancelation in June from extreme heat. An outstanding 27-cars competed on April 24 with Josh Gross earning the win. Luis Tyrrell of Brisbane won the feature on March 27 over a 24-car starting field.

Action gets underway on Friday with practice from 5pm until 8:45pm with pit gates opening at 3pm. On Saturday, pit gates open at noon with practice at 2:00pm. Qualifying hits the track at 3:45followed by heat races. Short Track TV goes live at 6:00pm with four features to follow.

Madera Racing on MAVTV airs Monday nights at 4:00pm Pacific. The second round of the Nut Up Pro Late Models airs on Monday August 2nd!